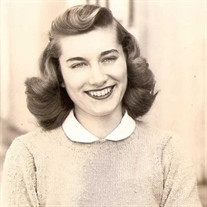 Born 5 February 1928 in Oregon City, Oregon, Margaret Joan (Crawford) Epperson passed away peacefully surrounded by family on 23 May 2018. She succumbed to illness attendant to age having recently celebrated her 90th birthday. She will be buried at Willamette National Cemetery, Portland, Oregon reuniting with her husband of 64 years Robert Max Epperson who passed away 5 October 2012. Joan, as she was known to her family and friends, lived an amazing life filled with wonderful people. Some friends she had throughout her life came from her days at Barclay Elementary where she had played on the softball team because of the cute uniforms and from her time at Oregon City High School where she had served as the yearbook editor, to make sure that every picture had the names of the people properly identified. Growing up she had essentially four mothers with her sisters, Marion, Betty and Laverne providing guidance and support along with her mother, Ivy. She was twelve years junior to her nearest sibling which meant that she was showered with attention and love. But with her parents and siblings having since passed, Joan often reflected that she was indeed the last “leaf on the tree” and looked forward to eventually being reunited with them. After the end of the 2nd World War, she was introduced to a veteran who had an airplane. He was a war hero who had flown for the Navy and she was told that he had an airplane out in Estacada. Using her brother and other friends to help introduce them, she finally met Bob Epperson. Married 15 August 1948 she and Bob started their family living in a small log house on Beavercreek Road. Four sons were born to the couple; Eric Robert Epperson, Roger John Epperson, Randal Max Epperson and James Andrew Epperson. No matter what she did she protected her boys. Whether attending “back to school nights,” teacher conferences or winter and summer school plays, she would be there. Being a Cub Scout Den mother, sewing on scout badges and attending Courts of Honor for her four Eagle Scout sons, she was a constant support. Active in civic affairs she lead a group to fight the development of a shopping center next to the grade school. Growing up with Joan taught her boys to appreciate her skills at interrogation. She was the best inquisitor, coming home from nights out with friends she would always ask, “did everyone have a good time?” After high school Joan had gone to work at the Title and Trust company in Oregon City where she learned skills that she reminded us of throughout her life. Later during the 60’s she worked as a Welcome Wagon hostess sponsored by the Oregon City Camera Shop, Kellum Datsun, Colonial Office Products and others. She enjoyed meeting with new move-ins to Oregon City because of her love for her town. Her greatest joy was in the kitchen. No matter the time of day she would always invite a guest to come in and enjoy some of her home made cookies. Recipes weren’t always followed and yellow food coloring may have been a substitute for lemon as needed, but she made due with what she had. If you were young and sat at her table, the prize of the day was membership in the "clean plate club." She made wheat bread before it was fashionable. Recycled aluminum cans before it was trendy. Demanded that you turn off the lights when you left a room and made sure the wood box was full before television time. Most of her frugality came from her desire to remember her Scotch Irish heritage as well as an attempt to create a sustainable lifestyle. It all worked. Her family never was want for food on the table and a warm house to sleep in. That was her prime goal in life, to feed her family and make sure that everyone was having a good time. Her love of her children continued to her grandchildren as she would invite them to her house to participate in such “fun” activities as killing the blackberry bushes or cutting the jungle grass. There was always more work to complete and she enjoyed “teaching" young ones how to work. She really didn’t want anyone to sit and watch, hers was a participative household. Family always came first for Joan. When with her children and then grandchildren and then great grandchildren, she loved to sit and read with them. Many times household chores were delayed as she would rather spend time reading with a small child than do vacuuming. A member of the Church of Jesus Christ of Latter-day Saints since 1967, she loved to work on her genealogy and search out her family tree. She and Bob spent years assisting patrons in the Seattle and Portland Temples. Joan was the epitamy of “E” for effort. She enjoyed her family and even tried to play the piano, but as a young girl had decided that she could never measure up to the abilities of her sisters or mother. But she still tried. She didn’t give up on a cause or a person that she believed could be helped. Joan was preceded in death by her parents John Crawford and Ivy Belle Roake and her siblings Marion Isabelle Bentley, Sara Elizabeth (Betty) Wiese, Roger (Rod) James Crawford and Ivy Laverne Crawford. She is survived by her children as well as 16 grandchildren and 21 great grandchildren. A wonderful family filled with love and appreciation for a sweet Mother, Grandmother, Great Grandmother and friend, Joan will be fondly remembered as well as sadly missed.

Born 5 February 1928 in Oregon City, Oregon, Margaret Joan (Crawford) Epperson passed away peacefully surrounded by family on 23 May 2018. She succumbed to illness attendant to age having recently celebrated her 90th birthday. She will be buried... View Obituary & Service Information

The family of Margaret Joan Epperson created this Life Tributes page to make it easy to share your memories.

Send flowers to the Epperson family.