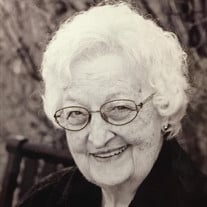 Marian Lois Campbell (Fisher) Marian Campbell, beloved wife, sister, mother, grandmother, and great grandmother was born 13th of November 1937 to Jewel and Homer Fisher in Bozeman, Montana and was called home to our Lord and Savior on June 2nd, 2017. Marian grew up in Bozeman with her parents and brother, and graduated from Gallatin County High School. She met John P Campbell at a Montana State College Sigma Alpha Epsilon Fraternity function and they were married on September 16, 1956. Marian and John made several moves early in their marriage and finally made Helena Montana their home in 1958. Marian worked for the Montana Secretary of State from the 1970’s until her retirement in the1990’s. She was a consummate bowler and enjoyed traveling with her friends to many tournaments, including several National events. Marian served as Secretary of the Montana Women's Bowling Association for many years, where she took great pride in helping the Association grow and bring the sport to younger women. Marian was preceded in death by her parents and husband John, and is survived by her two sons, Edward (Stacy) Campbell of Sandy, Oregon and Thomas (Lynn) Campbell of Aliso Viejo, California; brother Tom (Kay) Fisher of Gallatin Gateway, Montana; grandchildren John (Natalie) Campbell of Tigard, Oregon, Andrew (Sherah) Campbell of Beaverton, Oregon, Ashley (Abdiel) Robles of SeaTac, Washington, Sarah( Jacob) Feldhacker of Sandy, Oregon, Garrett( Courtney) Miller of Estacada, Oregon and great grandchildren Cole and Klara Campbell, Liliana Robles, Wyatt and Emma Feldhacker, and Riley Miller. Interment will be at the Montana State Veterans Cemetery at Fort Harrison in Helena at a later date. In lieu of flowers the family requests that donations be made to Friends of the Association of Montana Troopers Inc. by making your check out to the Association and sending it to Keith Edgell, Treasurer at 1820 South 56th Street West, Billings, MT 59102.

The family of Marian Lois Campbell created this Life Tributes page to make it easy to share your memories.

Send flowers to the Campbell family.