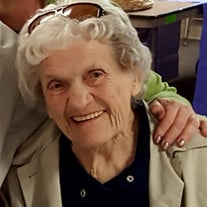 Marjorie (Marge) Anderson passed away on January 14, 2021, in Oregon City. She was born on December 3, 1922, in Sidney, Montana, the oldest of nine children born to John C. and Elvina Larson. At the age of five, her family moved to Sioux City, Iowa. After graduating from high school, she met Kenneth Anderson, and married at age 19. She followed Kenny through his time in the military during World War II, and they eventually settled in Oregon. They lived in SE Portland for 20 years, and then moved to Oregon City in 1972. Marge worked at various jobs, and in 1967, she started working at US Bank, for 29 years full-time, and then part-time for 11 more years. Marge was an accomplished sewer, loved to knit and had a passion for reading, which continued through audio books when macular degeneration took her eyesight. She was enjoying audiobooks until the last week of her life. Marge was a bit like the Energizer Bunny. Despite a number of health problems, including carotid artery surgery, COPD, congestive heart failure, and three types of cancer, she “kept going and going and going.” She caught COVID-19 while in the hospital in fall 2020 yet survived it. She eventually succumbed to complications from vascular dementia. Marge was a lifelong Lutheran, and most recently attended Trinity Lutheran Church in Oregon City, where she was their oldest member for a few years. Marge was preceded in death by her husband, Kenny, and seven of her eight siblings. She is survived by her daughters, Donna Marie Bell (John), Barbara Jo Wolf (John) and Carol Sue Moore (J. Patrick); her brother, James Larson; by six grandchildren (Christina, Debra, Jason, Jeremy, Jennifer and Matthew) and eight great-grandchildren Cheila, Gracie, Hayllé, Ellie, Madelyn, Annabel, Abby and Evelyn. The family wishes to express their thanks to the staff of Premiere Care in Oregon City for their compassionate care of Marge.

Marjorie (Marge) Anderson passed away on January 14, 2021, in Oregon City. She was born on December 3, 1922, in Sidney, Montana, the oldest of nine children born to John C. and Elvina Larson. At the age of five, her family moved to Sioux City,... View Obituary & Service Information

The family of Marjorie Elvina Anderson created this Life Tributes page to make it easy to share your memories.