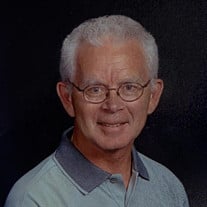 Marvin was born in McCook Nebraska May 22, 1940 to John and Mala Thornley. He was the oldest of their three sons. The family moved to McMinnville, Oregon in 1943. Marvin graduated from McMinnville High and Linfield College. He received his master’s degree from Oregon State University. Marvin met his wife Marva at Linfield. They married in 1964. They were married fifty years before she passed away in 2014. Marvin and Marva had two children, Michele and Marci, and one of Marva’s students, Ching, was like a daughter to them. Marvin was a middle school and high school teacher and counselor before moving to the college level as a vocational and career counselor at Clackamas Community College. At CCC, he started the career center and was vital to helping many students find their future careers and vocations, including a future president of Clackamas Community College. Marvin retired from CCC in 1995. Marvin was an active member of the Oregon City United Methodist Church and the St. Paul’s Methodist Church, serving on many committees and was in the church couple’s club. He was a member of the Optimist Club in Oregon City, and he and Marva were also members of the Trick N Racy Car Club in Oregon City. He was the neighborhood association president for several years while he and Marva lived on Mt. Scott. Throughout his life, Marvin loved to be outdoors, fish, build things, talk about cars, and spend time with his family. Marvin faced many health challenges over the past 16 years related to multiple strokes but persisted through it with a smile and a laugh that could light up a room. Marvin passed away peacefully after a long battle with vascular dementia. His family is thankful for his amazing caregivers Almaz and Ben and the hospice team at Housecall Providers. He was proceeded in death by his brother Gil, and his wife Marva. Marvin is survived by his brother Arnold, daughters Michele Thornley (Jack Gallimore), Marci Hartson (Chris), and Ching Hill, six grandchildren, and numerous nieces and nephews. Due to the pandemic, a memorial service will be held at a future date. Contributions in Marvin’s memory can be made to The Clackamas Bookshelf (www.theclackamasbookshelf.org) to help support the education of the next generation of kids in Clackamas County.

Marvin was born in McCook Nebraska May 22, 1940 to John and Mala Thornley. He was the oldest of their three sons. The family moved to McMinnville, Oregon in 1943. Marvin graduated from McMinnville High and Linfield College. He received his master&#8217;s... View Obituary & Service Information

The family of Marvin Duane Thornley created this Life Tributes page to make it easy to share your memories.

Send flowers to the Thornley family.