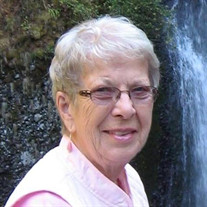 Mary Lou Gunis died peacefully at home on July 30, 2018 at the age of 84. In October of 2016, Mary Lou was formally diagnosed with lung cancer. Her inspiring drive and determination did not stop her from enjoying things she loved most: her family, visiting with friends at coffee, tea or lunch, golfing, attending plays and concerts, playing bridge and traveling. Mary Lou’s mother and father were both direct descendants of pioneers who arrived and settled in the Oregon Territory. They raised their four daughters in Eastern Oregon in the Hermiston area where Mary Lou was born on October 31, 1933. After graduating from Echo High School, Mary Lou moved on to attend Eastern Oregon College of Education in La Grande, where she met Jim, her husband of 55 years. Shortly after they were married, the U.S. Army stationed Jim in Europe. Mary Lou joined him a year later in Germany. During this time, they toured Europe together, igniting their passion for travel. They shared their love of travel with their children spending summers camping and traveling extensively through the Pacific Northwest. In their retirement years, they returned to Europe and traveled to Australia, the South Pacific, the Caribbean, Canada, Mexico, and 46 states. They discovered Coachella Valley and fell in love with the weather so they wintered there for nine years prior to Jim’s death at their home-away-from-home, Rancho Casa Blanca. After Jim’s death, Mary Lou continued her travels exploring South America and China. Mary Lou spent 59 active years in Oregon City. She worked as an elementary school counselor in the Oregon City School District. She was also a member of St. Paul's Episcopal Church serving on many committees and outreach programs. Mary Lou will be remembered as a determined, generous woman who thrived on serving others. Many women and children in her community have been blessed by her love, support and generosity. The world will not be the same without her. Mary Lou is survived by her son, Paul Gunis; her daughter, Maria Gunis; two grandsons, Sam and Tom Randle; sisters, Marguerite Chin and Verla Gardner. A celebration of her life will take place at St. Paul’s Episcopal Church, 822 SW Washington St. (Washington and 9th St.) in Oregon City, Saturday, August 18, 2018, at 11 am. In lieu of flowers, please send donations in remembrance of Mary Lou Gunis to: OSC P.E.O. Sisterhood Charitable Trust, 980 NW 12th Ave, Canby, OR 97013 or donations can be made to the Clackamas Women’s Services: www.cwsor.org and click on ‘Donate Now.’

Mary Lou Gunis died peacefully at home on July 30, 2018 at the age of 84. In October of 2016, Mary Lou was formally diagnosed with lung cancer. Her inspiring drive and determination did not stop her from enjoying things she loved most: her... View Obituary & Service Information

The family of Mary Lou Gunis created this Life Tributes page to make it easy to share your memories.

Send flowers to the Gunis family.