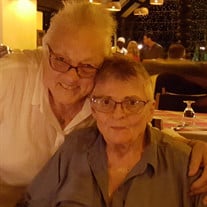 Mary Jane was born in Astoria, Oregon, to Glen and Mary L. (Mendenhall) Kamm, joining two-year-old brother, Johnny. The pivotal event of Mary Jane’s childhood was the tragic death of her brother, Johnny, who was struck and killed by a car while he was delivering newspapers on his bicycle at age 12. Mary Jane graduated from Astoria High School in 1958; since her Baptist Church was important to her she wanted to attend a Baptist college, which she did briefly, but was expelled for being lesbian…being rejected by her church and college broke her heart but, true to form, it did not stop her. She returned to Oregon, completed her Bachelor’s Degree at Portland State University in the mid-1960’s; and, later, in the 1980’s, earned her MBA also at Portland State University. After obtaining her BS degree in biology, she worked in research at the Oregon Health Science’s University; but that job ended due to life-threatening medical issues that prevented her from working. Following extensive medical treatment, she worked at a number of jobs ranging from school bus driver to carpenter. She was in the first carpenters’ apprenticeship program in Portland to admit women. When the economy took a downturn and construction jobs fell off, she worked as a warehouse worker supplying produce from local farms to local groceries; later she was promoted to supervisor position in the warehouse. While at the warehouse, she returned to college part-time and obtained her Master’s in Business Administration from PSU. Briefly, after earning her MBA, she was self-employed as a business consultant, until health issues once again interrupted her plans and she was unable to continue working. Mary Jane and Alice met in 1979; in 1981, they had a holy union – a “commitment ceremony” at Metropolitan Community Church of Portland (holy unions were offered by MCC to celebrate a couple’s commitment to one another, in the presence friends and family, since same gender people could not legally marry at that time); then when Multnomah County issued marriage licenses to gays and lesbians in 2004, they were legally married…only to have that marriage voided by the government. On a trip to Washington State in 2013, after same-gender marriage became legal there, they were married for the 3rd time … and that one finally took. Mary Jane was active in LGBT rights. She took part in the first and subsequent Gay Pride Parades in Portland. Her favorite saying was “You just have to keep showing up”. She was also on the founding Board of Directors for the Metropolitan Community Church of Portland. In 1982 Mary Jane and Alice moved to the Beavercreek area. They became involved with Beavercreek UCC where Mary Jane was involved in many committees and served as Moderator. Mary Jane was a life-long learner, had an immensely curious mind, and was an avid reader. In recent years, she participated in spiritual development through several programs including “Seeking God in the 21st Century” offered at the Episcopal Cathedral under the direction of Marianne Borg; and, participated in another two-year program “Academy of Spiritual Formation.” Crafts and art were important to her to keep her hands and mind busy when she was “resting.” Mary Jane was a very active person, in spite of medical issues that would have stopped most of us - she lived 60 years with Crohn’s disease - she kept living her life to the fullest…she did not let disability nor limitations stop her from doing what she wanted to do. So, it was somewhat in keeping with that spirit that she was on an adventure snorkeling in St. Lucia in the West Indies when she died. In recent years, she and Alice enjoyed many overseas adventures including visiting Turkey, Peru (Machu Picchu), the Galapagos Islands, Ireland, Scotland, Australia, New Zealand, Fiji; and, had plans for seeing the fall colors in the northeastern USA this coming fall. Another favorite saying of Mary Jane was: “Life should not be a journey to the grave with the intention of arriving safely in a pretty and well-preserved body, but rather to skid in broadside in a cloud of smoke, thoroughly used up, totally worn out, and loudly proclaiming "Wow! What a Ride!” (Hunter S. Thompson) She added “with a glass of Rum in one hand and a Chocolate bar in the other”. She lived this mantra. Mary Jane is survived by Alice Myers, her beloved spouse of 36 years; her church community (UCC Beavercreek); and, her many friends from over the years; she also is survived by cousins in California and in Canada. She was predeceased by her father, mother and older brother, Johnny. A Celebration of Life service will be held at Beavercreek UCC (United Church of Christ), (also known as the 10 O’clock Hill Church), 23345 S. Beavercreek Rd., Beavercreek, Oregon, 97004 on what would have been Mary Jane’s 77th birthday, Tuesday 8/15/2017 at 2:00pm. In lieu of flowers, if you choose, donations in Mary Jane’s memory would be appreciated: Beavercreek UCC 23345 S. Beavercreek Rd. Beavercreek, OR 97004 Oregon Humane Society 1067 NE Columbia Blvd. Portland, OR 97211 Habitat for Humanity 1478 NE Killingsworth Portland, OR 97211 Or to a charity of your choice in Mary Jane’s memory. Thank you.

Mary Jane was born in Astoria, Oregon, to Glen and Mary L. (Mendenhall) Kamm, joining two-year-old brother, Johnny. The pivotal event of Mary Jane&#8217;s childhood was the tragic death of her brother, Johnny, who was struck and killed by... View Obituary & Service Information

The family of Mary Jane Kamm created this Life Tributes page to make it easy to share your memories.

Mary Jane was born in Astoria, Oregon, to Glen and Mary L. (Mendenhall)...

Send flowers to the Kamm family.