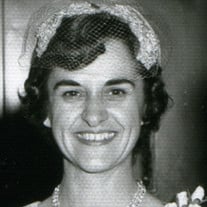 Mary Papez Serres was born January 16, 1920 in Sela Village, Hinje Parish, Slovenia. Mary immigrated to the US at the age of two with her mother Mary Papez and brother John Papez Jr. Her father, John Papez, operated a tailor shop at Bernie Herrman’s Men’s Store in Oregon City. Mary grew up with her brothers John, Joe, and William as well as her sisters Veronica and Dorothy in West Linn. Mary graduated from McLoughlin Institute in Oregon City. Starting in her teens she was employed in domestic work and child care. She graduated from West Linn High School in 1938. Through her domestic work she became acquainted with the Serres family and met her future husband Joe Serres who was an established farmer and greenhouse operator in Oregon City. In 1939 Mary joined Joe in marriage. They operated the Joe Serres greenhouses and farm on Forsythe Rd. northeast of Oregon City in association with three of Joe’s brothers, John, Mike, and Ted Serres. Each brother operated his own range of greenhouses growing slicing salad cucumbers in the winter season for sale in the Northwest. Joe and Mary also grew vegetable plant starts in the greenhouses for other farmers in addition to outside vegetables, U-pick tomatoes, hay, grass seed, and beef cattle for over 40 years. Mary personally packed most of the cucumbers produced at the Joe Serres Greenhouses. She operated the U-pick tomato business out of her kitchen along with household duties and kept the farm business books. Mary managed the household and raised a family of four sons. She enjoyed social events with neighbors, friends and family and was always open for a game of scrabble, an outing to the beach, a picnic or skating at Oaks Park. Mary and Joe enjoyed fishing, clam digging, huckleberry picking, hunting, camping and other family recreation. Mary was a competitive card player always ready for a game of Old Maid with the grand children or 500 with friends. The door was always open for family and friends under any circumstances. She sponsored a 4-H club and supported her sons scouting activities. She was always prepared to serve a home cooked meal by the clock. Mary dropped everything to entertain grandchildren as soon as they arrived and made each and every one feel that they were the most special grandchild. She provided welcoming support for her daughters-in-law. Mary was active in the community as a member of St Johns’ Catholic Church, St Johns Parish board, Oregon City Elks, and Hill Crest Community Club. . When Joe and Mary retired from farming in the 1970’s their son Dan Serres and his wife Patti converted the range of greenhouses to growing bedding plants, expanded production of U-pick Tomatoes and other field grown vegetables. They added ranges of greenhouses and enlarged operations to produce the present Serres Greenhouses and Farm operation. Mary and Joe enjoyed several years of retirement on the farm with frequent trips to their cabin at Three Rivers and other favorite hunting and fishing destinations. Mary was a strong advocate of education, self improvement, and hard work. After Joe passed away in 1988, Mary stayed on the farm and provided family support and leadership. She renewed a life long interest in nursing and healthcare by serving as a volunteer at Willamette Falls Community hospital . Mary also enjoyed travel with friends and relatives. In 1995 and 1998 Mary returned to her birthplace in Sela, Slovenia and other European locations to visit family. She was trip interpreter, using her childhood knowledge of Slovenian to facilitate reconnections with Slovenian relatives. Mary passed away in Oregon City, Oregon on March 23, 2011. She will be missed by friends and family and remembered for her hard work, determination, generosity, love for family, and love of life. Mary is survived by sons Edward (Linda) and Daniel (Patti) Serres of Oregon City, William (Nancy) Serres of Redmond, WA, daughter-in-law Dianne Wilson of Stafford, sisters Veronica Peters of West Linn and Dorothy Shick of Sherwood, brother Joeseph Papez of Lake Oswego, sister-in-law Anne (Serres) Quinn of Portland, 15 grandchildren, 22 great-grandchildren, and numerous nieces and nephews. She is preceded in death by husband Joseph Serres, son Joseph Serres Jr., father and mother John and Mary Papez, and brothers John Papez Jr. and William Papez. PDF Printable Version

Mary Papez Serres was born January 16, 1920 in Sela Village, Hinje Parish, Slovenia. Mary immigrated to the US at the age of two with her mother Mary Papez and brother John Papez Jr. Her father, John Papez, operated a tailor shop at Bernie... View Obituary & Service Information

The family of Mary Serres created this Life Tributes page to make it easy to share your memories.

Send flowers to the Serres family.