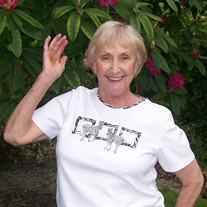 Mary Eleanor Thompson (Swetland), a lifelong resident of the Portland area, passed away peacefully on Tuesday, January 2, 2018. She will be missed by countless friends and family members and will be remembered fondly for her generous and lively spirit. Mary was born March 24, 1935 in Portland, Oregon to Donald Neal Swetland and Mariam Elizabeth McCarter. In 1939, her sister Norma Jean was born. Her childhood was spent in the Darlington neighborhood, and she continued to regularly meet up with her kindergarten class for their annual reunions until after her 80th birthday. Mary graduated from Franklin High School in 1953, and later that year she married Joseph Patrick Gibson in Portland, Oregon on June 4, 1953. They lived in the Portland area where they had their first daughter, Laurel (Laurie) Kay, on September 13, 1954. Laurie was followed by Kathryn (Kathie) Lynn on March 2, 1956, and Joseph (Joe) Patrick Jr. on May 21, 1960. Mary was also extremely close to her niece Jeannie, whom she raised as her own after her sister Norma's passing. During her career, Mary worked for PECO Manufacturing, Tektronix, and for the State of Oregon Social Services Department. In her later years she also worked part-time as a Product Demonstrator at Costco and enjoyed meeting all the customers. Mary and Joseph divorced in 1976, and she later married Robert (Bob) Thompson. She loved to dote on her family, especially her grandchildren, great-grandchildren, her cats and her many longtime friends. She loved learning and meeting people, and she often spent her spare time learning new skills and hobbies. She was especially proud of her proficiency on the computer and took classes at the Milwaukie Senior Center whenever she could. She was preceded in death by her mother and father, sister, daughters Laurie and Kathie, granddaughter Sara and grand-niece Shayla. She is survived by her son and daughter-in-law, Joe and Wendy; niece Jeannie; grandchildren Kate and husband Mike, Alexandra, Garrett, and Jessica; grand-nieces and nephews Crystal, Heidi and husband Bill, and Jeremy; great-grandchildren Madison, Hannah, Sam, Elizabeth and Bailey; and numerous grand-nieces & nephews, cousins and extended family.

Mary Eleanor Thompson (Swetland), a lifelong resident of the Portland area, passed away peacefully on Tuesday, January 2, 2018. She will be missed by countless friends and family members and will be remembered fondly for her generous and lively... View Obituary & Service Information

The family of Mary Eleanor Thompson created this Life Tributes page to make it easy to share your memories.

Mary Eleanor Thompson (Swetland), a lifelong resident of the...

Send flowers to the Thompson family.