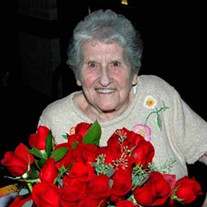 Maxine Bertha McNees was born on September 8, 1916 in Rosebud, Montana. She was the youngest daughter of Margaret E. and Charles B. Peters. Raised on a farm, she developed a deep love for nature and for helping people. After graduating from Rosebud High School in 1932, she began her lifelong career in nursing. Helping others became the hallmark of her life. When WWII occurred, Maxine moved to San Diego, CA and worked in a factory to help the war effort by being a riveter. In 1944 she met her future husband, Chester Earl McNees of Pomona, KS. The couple married on May 2, 1945 in Missoula, MT with her mother, Margaret E. (Peters) Veach as her Matron of Honor. The couples settled in Kellogg, ID. In 1955 Maxine & Chester welcomed the birth of their only child, Harold Earl McNees. However, after the unexpected death of Chester in 1956, Maxine and her son moved in with her widowed mother and lived in Coeur D'Alane, ID. Through the years Maxine continued to work in the field of nursing though she truly loved Obstetrics most of all. Her love for all babies continued throughout her life. Nothing gave her more pleasure than holding a baby in her arms. Seeking a better climate away from harsh winters of Idaho, Maxine and family decided to move to Gladstone, OR in 1969. The move to the Pacific Northwest proved to be rich in blessings! Work, college, church, volunteering and making friends. There would also be the blessing of 'her boys' as she referred to her son and two of his school friends, Ron and Paul Boggs. Their sister, Wanda, who had graduated a few years earlier was very much a part of of this extended family. In June 1973, Grandma Margaret ‘fulfilled a lifelong dream’ which was to see both her daughter graduate from college (Maxine from PCC with her RN Degree) and her grandson (Harold) graduate with Honors from Gladstone High School at the same time. Maxine continued to work for Dwyer (now Providence Milwaukie Hospital) and later Willamette Falls Hospital. After graduating from PCC, Maxine worked for Rose Villa Nursing Home in Milwaukie until she retired from 1982. During her retirement she kept busy with hobbies and interests such as gardening, planting roses, garage sailing with her dear friend, the late Bea Bryan; as well as enjoying the warm friendship of her closest neighbors and longtime friends, Don & Shirley Potts of Gladstone. Maxine was happiest when baking her legendary pies, cookies and zucchini breads. She was also a very accomplished seamstress as well as her proficiency in forms of needlework. Upon the move to Oregon, Maxine became a parishioner of St. John the Apostle Church (STJA) in Oregon City, and volunteered much of her time to help the needy through The Society of St. Vincent De Paul, as well as other organizations. A real blessing for her was attending weekly bible study at STJA where she shared her homemade pies, breads and cookies with others. In later years, she moved into Villa St. Margaret in Portland, a senior independent living facility. Always one to make friends and offer a kind word, she settled easily into her new life. Maxine especially enjoyed attending daily Rosary or occasionally playing pinochle. Attending weekly mass at St Anthony’s with her friends was a true joy. In 2006, a surprise 90th Birthday party was given for Maxine with many friends and family in attendance. It was during this celebration that she was inducted into the Red Hat Society as the Queen Mum of "The Fiesty 90ers". She was adorned in the official Red Hat Society colors of red & purple regalia and received her first red hat: it was a red baker's hat! She was completely surprised on this auspicious occasion and talked about it afterwards for some time. When it comes to baking, many of the residents at Villa St. Margaret would put in their order for various baked goods, including Fr. Pat. Maxine was always happy to give to others and asking nothing in return. In fact, her baking expertise became known on the east coast, too. On numerous occasions when Harold (and Virginia) visited his wife's family in Maryland, Maxine's wonderful "gifts" of baked zucchini breads were always enthusiastically received. Her last weeks were spent under the loving and compassionate care of New Beginnings Adult Care Home (located in Milwaukie) and the Adventist Hospice program. Her final journey was peaceful. Our most heartfelt thanks to the entire staff. Maxine is survived by her son, Harold McNees (and his wife, Virginia), her nephew Donald (and Iva) Brooks of WA., grandnephews Patrick and Larry; her niece, Barbara Ann Satterwhite, of ID. In addition, she has nephews and nieces and grandnieces in CA which include: John & Pam McNees and their 3 daughters in Petaluma; also, Fred and Meg (McNees) Weisel and their daughter of Santa Rosa. Maxine was predeceased in death by her sister, Cecilia Oglesby. A funeral mass will be held 11am on October 22, 2009 at St. Anthony of Padua Catholic Church in SE Portland (located on Powell Blvd and 79th) concelebrated by Fr. Patrick Donoghue (of St. Anthony’s) and Fr. Donald Buxman of Christ the King. A reception will immediately follow in the Parish Hall. Interment will be held at St. John the Apostle Cemetery in Oregon City, Oregon at 2pm. The family of Maxine would respectfully request that in lieu of flowers, donations be made to St. Anthony of Padua Catholic Church. (http:/www.stanthonypdx.com). Please share your memories about this extraordinary woman! PDF Printable Version

Maxine Bertha McNees was born on September 8, 1916 in Rosebud, Montana. She was the youngest daughter of Margaret E. and Charles B. Peters. Raised on a farm, she developed a deep love for nature and for helping people. After graduating from... View Obituary & Service Information

The family of Maxine Bertha McNees created this Life Tributes page to make it easy to share your memories.

Send flowers to the McNees family.