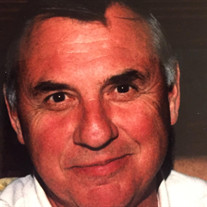 Michael Jeffrey Claboe peacefully passed away surrounded by his family at his Hillsboro home on Monday, March 13, 2017 at the age of 77, Mike’s personality remained strong throughout his fight with cancer, renal and heart failure. In 1939, Mike was born in Seattle, Washington to John L. Claboe and Ruth N. (Smith) Claboe. He was second of six children. His father’s profession moved the family from Seattle to Whittier, Alaska, before resettling in Seattle where Mike excelled in football and basketball at West Seattle High School. Upon graduating high school in 1958, Mike attended Wenatchee Junior College, University of Idaho, and Western State College on football scholarships. He graduated from Western State College of Colorado in 1963 with a BA in Business Administration. After graduation he served in the US Navy. Mike was hired by Texaco in 1964 and worked as a sales representative and a regional manager while playing semi-pro football for the Lake Oswego Thunderbirds. In 1968, Mike married Sharon (O’Connell), had a son (Jon) and a daughter (Amy). In 1971 he purchased Bill’s Texaco at the corner of Allen and Hall in Beaverton where he was a mainstay in the business community for over 40 years. Mike prided himself on great customer service, and loved visiting with his loyal customers over the years. Mike later expanded his business by purchasing service stations in Progress and Aloha. The station in Aloha is still in the family today. Mike was an avid golfer and fisherman, and loved tending to his Helvetia farm where he grew Christmas trees, grapes and raised cattle. But above all, he loved his family. Mike attended every athletic event his children participated in and supported their athletic programs. A doting papa, Mike spoiled his grandchildren rotten. Mike is survived by his wife Sharon Claboe; his children, Jon Claboe and Amy Westerfield; his son-in-law Kirk Westerfield; grandchildren, Sydney and Luke Westerfield; sisters Patricia Turner and Kirsti Arndt; and brother Daniel Claboe. A grand celebration of life will be held a future date. In lieu of flowers, please make a donation to Comfort Hospice and please visit Hillside Chapel’s website at www.hillsidechapelfh.com to share your memories of Mike.

Michael Jeffrey Claboe peacefully passed away surrounded by his family at his Hillsboro home on Monday, March 13, 2017 at the age of 77, Mike&#8217;s personality remained strong throughout his fight with cancer, renal and heart failure. In... View Obituary & Service Information

The family of Michael J. Claboe created this Life Tributes page to make it easy to share your memories.

Michael Jeffrey Claboe peacefully passed away surrounded by his...

Send flowers to the Claboe family.