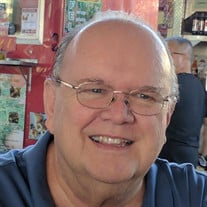 Michael (Mike) Smith passed away on November 9, 2021, at the age of 77 in Legacy Emanuel Hospital, Portland, Oregon, after an extended battle with kidney disease and chronic respiratory failure. Mike was a life-long resident of Oregon City where he was born August 13, 1944, the second son of Vernon and Lillie Smith. He was a 1963 graduate of Oregon City High School and graduated in 1967 with a Bachelor of Science Degree from Monmouth College of Education in Monmouth, Oregon. Mike taught fifth and sixth graders for 30 years at View Acres Elementary School in Milwaukie, Oregon; and he was an energetic participate in the Outdoor Program for the students. Mike was devoted to teaching art and returned to View Acres after retirement to teach art to all grade levels at the school. He loved his students and kept in touch with many of them through social media. He was a member of the retired teachers’ group from View Acres. Mike loved their monthly luncheons where they shared accomplishments, birthdays, and stories of their many years of teaching. Mike’s many hobbies included collecting memorabilia, making holiday cards and decorating and weaving gourds; but basketry was Mike’s passion. His prolific talent at basket weaving allowed him to teach the craft to others, as well as gain recognition by the Native American Community. As a result, he was allowed the rare opportunity to learn their special basketry techniques. Make was an active member of the Columbia Basin Basketry Guild and the Larch Mountain Country Artisans. Mike was also a member of the Oregon City United Methodist Church where he shared his artistic talents as a member of their Worship Design Committee. He loved his church family who spent many hours helping him when he became less able to get around on his own. Mike enjoyed traveling, and spent one summer after graduating from college traveling throughout the U.S. with his friends, Rob and Maggie Frieske. He also journeyed to Japan, Thailand, Germany, Austria, Belgium, and Hawaii. Mike traveled frequently to Boston, Shrewsbury and Cape Cod, Massachusetts, where he spent holidays with his sister and her family. Mike is survived by his sister, Carol Lawrence, and brother-in-law, Joseph Lawrence of East Dennis, Massachusetts; his niece, Nikole Nolle, her husband Peter and his great-nephews, Joseph and Thomas Nolle of Shrewsbury, Massachusetts. He is also survived by step-niece, Steffany Maloney of Derry, New Hampshire, and step-nephew, Jeffrey Lawrence of Braintree, Massachusetts, as well as by his niece Loretta Smith of Portland, Oregon, daughter of Larry Smith, Mike’s older brother who passed away in 2011. A memorial in celebration of Mike’s life with be held in the Spring of 2022. In lieu of flowers, the family requests that donations be made in Mike’s memory to the American Kidney Fund, Rockland, Maryland, or to the Oregon City United Methodist Church, Oregon City, Oregon.

Michael (Mike) Smith passed away on November 9, 2021, at the age of 77 in Legacy Emanuel Hospital, Portland, Oregon, after an extended battle with kidney disease and chronic respiratory failure. Mike was a life-long resident of Oregon City... View Obituary & Service Information

The family of Michael Walter Smith created this Life Tributes page to make it easy to share your memories.