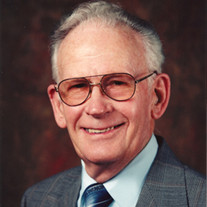 On September 22, Myron Henry Curtis quietly & peacefully slipped from the hands of his loved ones to the arms of his Lord. After 86 years of a blessed life on earth, he is now with his beloved wife Betty Lou in Heaven. Myron was born December 13th, 1922, to Harriet and Edgar T Curtis. He was raised with his two sisters, Violet & Betty on the family farm until the great drought and depression forced the family to move to Eugene where Myron began selling newspapers on street corners. Myron had a love for woodworking, and in high school began building furniture and a boat which was used by the Curtis family for a number of years. In 1943 he enlisted in the Army Air Corps. Eventually his dreams of flight were grounded due to high blood pressure, but were soon replaced with dreams of a special girl he met while training at the University of Nevada. Betty Lou knew just when and where he would be and just “happened” to be there at the same time. “I chased him until he caught me” she would recall. Myron and Betty Lou were married in 1946 and moved to Portland where Myron began working for General Electric. They purchased a parcel of property on 101st and SE Powell, and lived in a small trailer on the property. Soon thereafter, Myron purchased an old Army surplus trailer which he repaired, painted and sold, then purchased 2 more. Eventually he had six rental trailers, and purchased property on the North side of Powell where the family business exists today. Over the years Myron worked hard at building his business, but not at the expense of family or others. Myron & Betty Lou had four children who grew up in and around the trailer business. The family loved to travel and Myron & Betty Lou always found the time to do so. His love of woodworking grew into larger projects, as Myron eventually built two homes and a beach house for the family. Myron will long be remembered by his kind, gentle and generous nature. He lived simply and honestly with family and faith as his priorities in life. Over the years Myron received numerous awards and honors. For many years he was actively involved in the community, the Lions Club, and served on the David Douglas School Board. In 1998 he was awarded by the National RV Dealers Association with his induction into the Hall of Fame. Although he was always appreciative of any recognition he received, it was never done for glory. Myron preferred to work in the background, deflecting the praise he received to others. For over 30 years, Myron and Betty Lou traveled throughout the US and Canada collecting horse drawn vehicles, one of which will carry him to his final resting place. Myron is survived by his children, Myron Jr., Cammy, Mylo and his wife Marlene and Carley and her husband Bob. Eight grandchildren and 11 great grandchildren will also miss the love of their special Grandpa. PDF Printable Version

On September 22, Myron Henry Curtis quietly & peacefully slipped from the hands of his loved ones to the arms of his Lord. After 86 years of a blessed life on earth, he is now with his beloved wife Betty Lou in Heaven. Myron was born December... View Obituary & Service Information

The family of Myron Henry Curtis created this Life Tributes page to make it easy to share your memories.

Send flowers to the Curtis family.