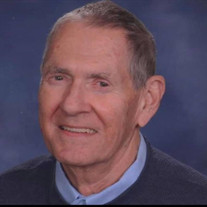 Newell Baptiste Bowers September 7, 1934 - June 1, 2019 Newell Baptiste Bowers, 84, of Oregon City, Oregon, passed away Saturday, June 1, 2019, at his home in Oregon City. Newell was born September 7, 1934, in Fairmont, Minnesota, to his parents Joseph and Winifred (Keeler) Bowers. Newell grew up in Missouri Valley, Iowa, and attended Missouri Valley High (Class of 1953). As the oldest son, Newell learned the craft of baking as an apprentice to his father in their family bakery in Missouri Valley, Iowa. He joined the Navy and studied at the Navy Commissary School in 1952. He went on to use his skills as a ship’s baker aboard the Heavy Cruiser, USS Toledo CA-133 during the Korean War. On May 29, 1954, Newell was united in marriage to Darlene Anne Dix at First Lutheran Church in Missouri Valley, Iowa. The couple lived in Missouri Valley until 1970 when they moved to Atlantic, Iowa. Together, they were co-owners of Bowers Bakery in Missouri Valley and Atlantic, Iowa. Newell and his wife, Darlene, were married for 55 years and had 3 children. In 1987 Newell earned the distinguished title of “Master Baker” an official recognition from the Retail Bakers of America. He was proud to be a retail baker on main street and in supermarket locations for more than 50 years. After his retirement in 2000, Newell launched his second career and became an author. He wrote 4 books of daily Christian meditations, 20 novels, and at his passing was working on a new novel. After his wife Darlene’s death in 2009, he moved to Oregon to begin a new adventure. There he enjoyed spending time with his family and friends, taking long walks, and exploring Oregon’s beautiful outdoors. He became a member at Prince of Life Lutheran Church in Oregon City and that is where he met, Carol Yates. He felt blessed to have found love a second time and they were married on August 12, 2014. Newell is survived by: * His wife Carol, of Oregon City, Oregon; * His daughter, Lee Ann (Rick) Heldenbrand of Lincoln, Nebraska, and their children: Ryan (Jaime) Incontro (daughter Arwen); Joel Incontro; Sarah (Zach) Joos (daughters, Harper & Lillian); Jessie Heldenbrand (son, Eric); Elie (Billy) Stovall (children, Brye, Cole, & Rynn); and Abbie (Matt) Doran (children Kylie & Jace). * His son, Steven (Judy) Bowers of Iowa City, Iowa, and their children: Brian (Jen) Denham (sons Jace, Dane, & Cade); and Matt Denham. * His daughter, Karen (Denise) Menke-Bowers of Oregon City, Oregon, and their children: Alexis Menke-Bowers; Sarita Menke-Bowers; and Elicia Menke-Bowers. * Carol’s daughter, Roxanne (Rob) Shive; * Carol’s son, Allan Shive, Jr; Carol’s Grandchildren: Grandson, AJ (Kelsey) Shive (Sons Brody & Xander); and Granddaughters, Sara Yates, and Jessica Persky. * Newell’s siblings: Joel (Carol) Bowers; Ruth Bowers; Mark (Linda) Bowers; Jon (Sharon) Bowers; sister-in-law, Leslie Bowers; along with a multitude of nieces, nephews, relatives, and friends. Newell was preceded in death by his parents, Joseph, and Winifred Bowers; his wife, Darlene Bowers; his grandson, Ron Bowers; his brother, Jerry Bowers. OREGON FUNERAL SERVICE: 1:00 p.m., Saturday, June 22, 2019, at Prince of Life Lutheran Church. A time of fellowship to follow immediately after the service. His cremains will be interred at Willamette National Cemetery in Portland, Oregon, at a private family ceremony. In lieu of flowers, memorials may be given in his name to Prince of Life Lutheran Church, for later designation by his family. IOWA FUNERAL SERVICE: 1:00 p.m., Friday, July 5, 2019, at a Graveside Service and cremains interment at Magnolia Cemetery in Magnolia, Iowa. A time of fellowship will follow until 5:00 p.m. at Sawmill Hollow Family Farm (2.5 miles away at 2159 Kennedy Avenue, Missouri Valley, Iowa). All are welcome! In lieu of flowers, memorials may be given to his children for a donation to be designated later by his family.

The family of Newell Baptiste Bowers created this Life Tributes page to make it easy to share your memories.

Send flowers to the Bowers family.