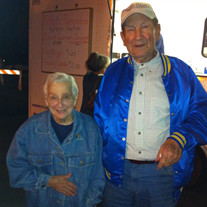 Norma Louise (Berlant) Papez passed away peacefully in the early hours of February 9th. She was born to Abe and Sonia Berlant on July 4, 1921 in Portland, weighing just 4 pounds. Little, but mighty to survive at that weight during those years. Norma attended grade school through High School graduating from Commerce High School (Cleveland.) The family moved to then Oswego in the early 1940’s. Norma met her future husband in his Taxi Cab. Joe was the owner of Oswego Cab. He would pick up Norma in Portland after work and bring her home. The two had a bet as to who would marry first. They both won as they married in September 1950 and remained so until his death in 2013. Mom was a perfectionist when it came to her home, garden and family. She took great pride in her house and yard. While at home mom was the dispatcher for the Taxi’s. She always went the extra mile for customers checking on the regulars if she hadn’t heard from them for an unusual period of time. An avid sports fan, she spent many hours watching the Portland Beavers in the 60’s, her beloved Ducks on TV as well as sports son Jay and grandson Jeffrey were involved in. She never missed a game. Lake Oswego Cab sponsored many City League basketball and softball teams. You could always find mom on the bench strongly supporting the teams along with dad. It was a family affair. Mom and dad were devoted grandparents to their grandson Jeff. They were his second set of parents. The two of them could always be counted on to be at all school events. They played an active role in his upbringing and he is forever grateful for the time spent with them. Norma is preceded in death by her husband Joe of 63 years, parents Abe and Sonia, siblings Minnette J. Steinberg, Donald L. Berlant and Todd S. Berlant. She is survived by her daughter Nan (Mark), son Jay ( Lynn) ,grandson Jeffrey, and nephew Loran Steinberg. At her request there will be no services. She will be interned at the Lake Oswego Pioneer Cemetery next to her loving husband Joe. Remembrances may be made to Bloomin Boutique 19376 Molalla Avenue Suite 160 Oregon City 97045 or Clackamas County CASA 421 High Street Suite 108 Oregon City 97045. Both are nonprofits that support children. Arrangements by Hillside Chapel.

Norma Louise (Berlant) Papez passed away peacefully in the early hours of February 9th. She was born to Abe and Sonia Berlant on July 4, 1921 in Portland, weighing just 4 pounds. Little, but mighty to survive at that weight during those years. Norma... View Obituary & Service Information

The family of Norma Papez created this Life Tributes page to make it easy to share your memories.

Norma Louise (Berlant) Papez passed away peacefully in the early...

Send flowers to the Papez family.