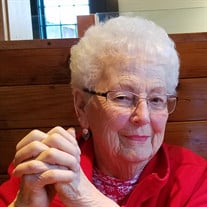 Patricia Mae (Macdonald) Mathis passed away April 2, 2018, in Oregon City, Oregon, at the age of 89. “Pat” was born March 27, 1929, in Portland, Oregon, to William and Agnes (Kimmel) Macdonald. She lived in Canby, St. John’s and Portland, attending local schools, and played saxophone in the Jefferson High School Band and a dance band. Pat married James Harold Mathis in Tulsa, Oklahoma, on March 28, 1946, and they were married 54 years. Returning to Portland, the couple had 4 children. They later moved to Molalla in 1973, where Pat worked at Sprouse-Reitz until her retirement. Pat and Jim moved to Oregon City in 1996. She lived her life for her family, and was a homemaker, loved to garden, was a seamstress, and crocheted lovely items. She was a good friend to everyone, a true mentor with strong character and admirable strength and will be loved forever and missed dearly by many. Pat was preceded in death by her husband, James; parents, William and Agnes Macdonald; and brothers, Lester and Richard Macdonald. She is survived by: her sister, Rhea Davis of Walla Walla, WA; 4 children, David (Christine) of Prineville; Rebecca Worley, Jeanne Swenson and James (Sandra) all of Oregon City; 9 grandchildren; 15 great-grandchildren; 6 great-great grandchildren; and numerous nieces and nephews.

The family of Patricia Mae Mathis created this Life Tributes page to make it easy to share your memories.

Send flowers to the Mathis family.