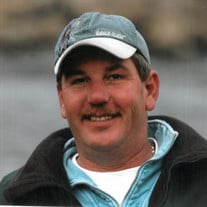 Paul Woodrum, age 57, of Oregon City passed away in his sleep at home after a brief illness on September 13, 2021. Also known as Woody to many of his friends, Paul was born August 31, 1964 in Hartford, Connecticut. His father, Gustav Woodrum and mother, Dorothy Woodrum (Gagne) were so excited to welcome their son. He grew up in a Christian home and had a deep belief in God. Paul was raised along the shores of Lake Champlain in Vermont which inspired his life-long love of fishing, hunting, and the great outdoors. Paul accelerated through life and through that life gained so many friends and experiences. He challenged himself to always climb to the next level. Moving to Oregon in 1999, he soon earned an Associate Degree in Robotic Engineering and enjoyed his job at Hitachi in Hillsboro as a senior engineer, traveling abroad to perform his work. In recent years, Paul traveled multiple times on behalf of Hitachi and spent weeks working at Intel locations both in Ireland and Israel. Early in his semi-conductor career saw Paul spending extended stays in Paris, France and Tokyo, Japan. As a Merchant Mariner, Paul maintained his credentials for boat handling and seamanship which he was so passionate about. As owner/operator of “Wildlife Fishing Adventures”, Paul was a local fishing guide on the Willamette and Columbia Rivers for over ten years. Fishing annually at Buoy 10, which always coincided over his birthday, was among his favorite fisheries along the Oregon Coast. He spent several summers guiding for Alaskan outfitters in Kodiak, Seward, and Soldotna. Locally, Paul had been part of the pro-guide staff of Fisherman’s Marine. Other employment opportunities led Paul around the world as he toured with the carpentry crew of Live Nation helping to produce concerts for musicians including Madonna, Lady Gaga, Rihanna, and Jennifer Lopez. In addition to fishing, Paul was an avid hunter of small and large game, both rifle and bow. As a young man in Vermont, he began hunting with his father and later with his Uncle Ray, brother-in-law Wayne, and so many near and dear friends and family. Soon after moving to Oregon, Paul was fortunate to draw a tag for a Big Horn Sheep hunt. He proudly displayed this mount along with countless others in his “man cave”. Paul was a generous man who loved his family, was enthusiastic about travel, wood working, and making tackle. He always enjoyed large gatherings of family and friends. If you went to a gathering hosted by Paul, you left with a tummy full of good food and so many laughs and stories to remember. At this time, Paul leaves behind his love, light and soulmate Kris, his beloved mother Dorothy Woodrum of South Burlington, Vermont, his sister Rose McDevitt (“Rosie toes”) and husband Wayne McDevitt (“Bro”) of Chester, Vermont; the nieces he loved so much Danielle (“Yellie”) and Chelsea (“Munchkin”) and nephew Christopher (“Kiss-e-Fer”), all of Vermont. Also, grand nieces and nephews Kyla, Collin, Sierra and Liam all of Vermont. He was pre-deceased by his father Gustav Woodrum, his grandmothers Alma Gagne and Grace Woodrum and grandfathers Paul Gagne and Lester Woodrum. There’s no question Paul led a full life and his hobbies were many; wherever Paul was, one would find fun and laughter. As he often told his wife, he would never cease to “amuse her or amaze her”. In lieu of flowers, please consider a donation in Paul’s honor to Sober Living Oregon, c/o The Gurnee House, 17050 Gurnee Avenue, Gladstone, Oregon 97027. A celebration of life followed by a short reception is scheduled for Saturday, October 2nd, 2021 at 2:00pm at New Hope Church, 10603 SE Henderson Street, Portland, Oregon 97266.

Paul Woodrum, age 57, of Oregon City passed away in his sleep at home after a brief illness on September 13, 2021. Also known as Woody to many of his friends, Paul was born August 31, 1964 in Hartford, Connecticut. His father, Gustav Woodrum... View Obituary & Service Information

The family of Paul Glenn Woodrum created this Life Tributes page to make it easy to share your memories.

Paul Woodrum, age 57, of Oregon City passed away in his sleep...

Send flowers to the Woodrum family.