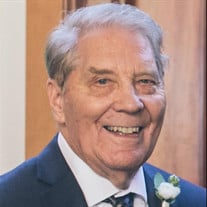 Ray Lee Streight was born on January 2, 1932 to Thomas Alexander and Elnora DeEll Streight. He was born at home on their farm in Boneita Springs South Dakota. Ray was the middle child of 11. He had 3 older brothers and 3 younger brothers, and... View Obituary & Service Information

The family of Ray Lee Streight created this Life Tributes page to make it easy to share your memories.

Ray Lee Streight was born on January 2, 1932 to Thomas Alexander...

Send flowers to the Streight family.