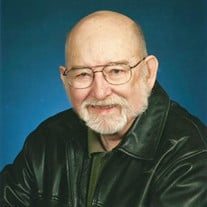 Raymond Edward Pemberton passed away in Oregon City, Oregon on Tuesday, December 6th. He was born November 11th, 1930 to Clarence and Nancy (Richards) Pemberton in Grant Nebraska. He Graduated from Stayton Union High School in 1948 and enlisted into the Marine Corps immediately following. He married Eva Faye Ralston on November 4th, 1955 and started a family. They had been married for 50 years when Faye preceded him in death. Ray served in active duty for 20 years, spanning both the Korean and Vietnam wars, as a radar technician and electronics instructor. After retiring from the Marines, Ray worked for LTV Aerospace before moving to General Telephone, and then Bell telephone in 1978. He finished up his career at OHSU where he worked as an electrician. He was able to retire 20 years ago and started his life of leisure working on his house, computers, his garden, experimenting with mason bees, smoking meat, feeding the fish in local rivers, and periodically painting his walls various shades of green in an attempt to help Faye find the right shade. He loved spending time with his dogs, Foxy, then Todrick and Fred, and taking care of his kids and their families. Ray is survived by his children, Glenn Pemberton, Julia Pemberton, Erica Watson and Robert Pemberton; grandchildren, Sarah Gore, Wesley Gore, Evan Pemberton, Cassie Peterkin, Ryan Pemberton, Alex Pemberton, Sam Pemberton and Abigail Pemberton; great-grandchildren, Jordyn Nutter, Blaine Peterkin, Jaxen Gore and Lincoln Pemberton.

The family of Raymond Edward Pemberton created this Life Tributes page to make it easy to share your memories.

Raymond Edward Pemberton passed away in Oregon City, Oregon on...

Send flowers to the Pemberton family.