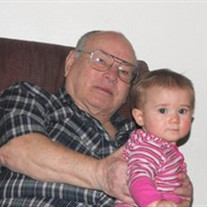 Ray Smith was born in Brawley, California on March 13, 1933 and passed away on August 13, 2009. He attended school in Brawley, California. Ray came into or lives around 1951. Ray was working at the school in Westmorland, California when he met his future wife, Helen they were married in the church in Westmorland by Pastor Julian Ashurst on April 22, 1953. They have been married for 55 years. Ray received the Holy Ghost and was baptized in Jesus name in 1952 while attending the church in Westmorland. While he was in Westmorland Ray was employed part of the time in the bee industry. Taking off honey, uncapping and extracting honey from the honey comb. He also helped move the colonies from location to location. Ray coined a new phrase that many older beekeeper still use. Ray did not speak any Spanish except, taco, burrito, enchilida— Timpee backee. They later move to San Diego where he received his engineering degree while working for the Helix Water District. While there he attended the United Pentecost Church in El Cajon, CA. My wife and I went up to visit them and spend the weekend when they lived on Prospect Avenue. We attended Sunday morning services with them and they invited their pastor and his wife to have lunch together. I believe was Rev. Burl Stevenson. Ray was very helpful (very careful) to dish out the enchilidas. He served the pastor first then the rest of us around the table. After grace Pastor Stevenson started very properly cutting off part of his enchilada as we also did. Pastor had a difficult problem because Ray put a pencil inside the one he was served. The family later moved to Portland Oregon area where he lived until is passing. In 1969 Ray worked in a freezer for United Grocers and later worked at FMC, using his degree in the repair and construction of large ships and also railroad boxcars. He retired from there in 1984. Ray and Helen have five children: (Barbara, Larry, Renee, Kay and Susan) Six grand children: (Jessica, Joshua, Derek, Jacob, Matthew and Brandon) 2 Great Grand Children: (Serena and Aniston). Beside his family and their time together, Ray played the guitar and enjoyed Gospel Music. Woodworking was one of his hobbies. I understand that while in San Diego he did a lot of fishing. Lately his thrill was to take his grand children to Oak Park and then to Taco Bell. Without a doubt, Ray‘s best decision was in 1951 when he Made Jesus Christ-- Lord of his life. That decision totally changed the direction of his life. He was never the same again. PDF Printable Version

The family of Raymond L. Smith created this Life Tributes page to make it easy to share your memories.