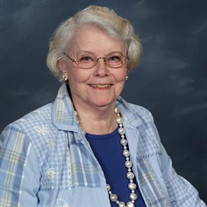 Retha Dokupil, age 91, died on Thursday morning, April 5, 2018 in Gladstone, Oregon. Retha, and her identical twin sister Reba, were born on February 10, 1927 in Calera, Oklahoma and grew up in a family of ten children. After graduating from Mead High School the twins moved together to Dallas, Texas where they met their husbands and were married in a double ceremony on September 17, 1950. Retha was married to Raymond Dokupil for 34 years until he died in January 1985. In 1997 she moved from her home in DeSoto, Texas to Washington State to be near her son Stanley and his family. In 2001 she moved to Oregon to be near her daughter Judy and her family. Retha was a dedicated Christian and always attended church wherever she lived. Prairie Creek Baptist Church in Dallas, Texas was her “home church” where she, Raymond, Stanley, and Judy attended for many years. She taught Sunday school, worked with Pioneer Girls and Vacation Bible Schools, served as counselor and cook for summer camps, and helped in many other capacities. Over the course of her life, Retha held several office jobs outside her home. However, she was primarily a home maker and a lover of children. In addition to raising her own two children and helping with her grandchildren, she provided loving childcare to more than a dozen other children over the years, and treated them as her own. Retha was preceded in death by her parents - Orbin and Gussie Hale, her husband Raymond Dokupil, and her brothers, M.D. and J.C. Hale. She is survived by her children - Stanley Dokupil of Kent, WA and Judy Capehart of Gladstone, OR. Her grandchildren, who called her “Nana”, will always remember her bright smile and her kind heart: Joshua Capehart, Timothy Capehart, Laura Flores, Hannah Dokupil, Raymond Dokupil, and John-Luke Dokupil. She has five great-grandchildren – Eleanor Capehart, Luke and Sienna Capehart, and Abigail and Hannah Flores. She will also be remembered lovingly by her siblings – Loretta Cook, Jimmy Hale, twin sister Reba Mangum, Mildred Hastings, Trula Pennington, Bobbie VanName, Nadine Calhoun, and numerous nieces and nephews. Services and internment will be at Laurel Land Funeral Home and Memorial Park, 6000 R.L. Thornton Fwy, Dallas, TX 75232. Viewing and visitation will be on Thursday, April 12 from 3 – 6 pm. Funeral service will be at 2 pm on Friday, April 13 at Laurel Land Chapel with a graveside service immediately following.

Retha Dokupil, age 91, died on Thursday morning, April 5, 2018 in Gladstone, Oregon. Retha, and her identical twin sister Reba, were born on February 10, 1927 in Calera, Oklahoma and grew up in a family of ten children. After graduating from... View Obituary & Service Information

The family of Retha Hale Dokupil created this Life Tributes page to make it easy to share your memories.

Send flowers to the Dokupil family.