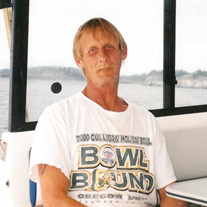 Richard Craig Boehnen, age 69, passed away Thursday, April 4, 2019 at 8:40pm in Hillsboro, OR peacefully in his home surrounded by his loving family and friends. He was born on February 18, 1950 in Huron, South Dakota to Avis Marie Boehnen (Tilbury) and Wilfred Kenneth Boehnen. He was the fourth son born to Avis and the first child born to Wilfred. Richard joined the Army April 19, 1968 serving almost 7 years a specialist E5. He was honorably discharged April 11, 1975. During his service he deployed into the Vietnam War. During his time in the military he was stationed in Germany and Ft. Lewis, Washington. Richard was a huge family man. In his life his family always came first and foremost. He enjoyed spending time with and spreading love to his family. In Richard’s time he and his wife Joan Boehnen spent their moments together on Friday nights going to dinner or watching a movie at home. He loved their three daughters and the eight grandchildren they gave him. Richard had a passion for hunting, fishing, BBQing, movies, watching the Oregon Ducks play football, watching nascar on Sundays, drinking tequila in his social hours with family and friends, watching cartoons and playing with his grandchildren, working, and being the humorous man that he was. Richard spent over 27 years working in the construction trade as a framer. He later then spent the last 7 years of his life working at Platt Electric as an order filler. Richard was always happy while he worked for Platt. He made some close friends at Platt that he held dear to him and always spoke about. He never had anything negative to say about his work nor his coworkers. He always enjoyed going to work and truly loved his crew! Richard was preceded in death by Wilfred Boehnen (father) and Avis Boehnen (mother). Richard was survived by his wife, his soulmate Joan Boehnen, and their children Tawny Buck (Danny), Kimberly Boehnen, Amanda Boehnen. Along with his other children Craig Boehnen (Renee), Mike Boehnen (Maria), Tonya Boehnen, Sharon Boehnen Clark, Deborah Wood (Josh), Karen Frembling (Andrew), Stacey Peterson (Chris) and Steven Boehnen, along with 25 grandchildren and 1 great grandchild. His brother’s Dennis Voss, Mike Voss, Terry Voss (Renee), Tom Boehnen (Debbie) and Randy Boehnen.

Richard Craig Boehnen, age 69, passed away Thursday, April 4, 2019 at 8:40pm in Hillsboro, OR peacefully in his home surrounded by his loving family and friends. He was born on February 18, 1950 in Huron, South Dakota to Avis Marie Boehnen (Tilbury)... View Obituary & Service Information

The family of Richard Craig Boehnen created this Life Tributes page to make it easy to share your memories.

Send flowers to the Boehnen family.