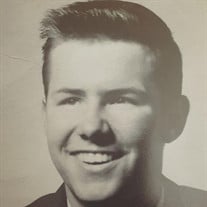 Richard “Dick” Jensen was born in Chicago, IL to Dorothy and Olav Jensen. He was the oldest of six children. He moved with his family to Seattle, Washington when he was 12 years old. His early memories included the long cross-country drive with his parents, brother and sisters to Seattle, Washington. He recalled that being on the long road trip meant that he could eat hamburgers nearly every day. He enjoyed a happy childhood with his family. He joined the United States Navy—Seabees—and was shipped to the Philippines. His strongest memories included his time with the military in the Philippines, Hawaii, Guam, and Kwajalein. Dick valued the lessons he learned in the Navy. He never forgot his military serial number and would often times recite it to his children. The military taught him skills of driving large trucks. Following active duty, Dick went home to Seattle where he worked delivering mail. He then moved to Oregon where he worked selling cars. In Oregon he met the love of his life, Georgia “Ann” Gunnestrup. Dick and Ann married and began their family. They moved to Oregon City and lived there for over 45 years. Always someone who loved cars and trucks, and who loved to be active, Dick found his calling as a semi-truck driver. Dick worked for Silver Eagle as a truck driver, and later accepted a truck driving position with Mailwell Envelope Company. Dick recommitted his life to the Lord in 1973. He spent his time providing for his family, studying the word of God, and constantly being busy with some type of project. Following retirement from Mailwell Envelope Company, Dick worked briefly at Rolling Hills Church in their maintenance department; he subsequently enjoyed his retirement at home with his wife. It was his love for the Lord that most people remember when they recall Dick Jensen. He loved reading scripture in the various churches he attended. He enjoyed the classic hymns as well as the old gospel music. Dick spent time memorizing various chapters and books of the Bible. During his final days of illness he laid in his hospital bed and recited passages from the book of Revelation. Dick was especially proud of his son, Rich, who became a pastor. He enjoyed his many phone conversations with Rich. He cherished the times he and Ann were able to visit Rich, Tina, Tabitha, Priscilla and Bellagrace. One of his favorite memories was spending time with them in Alaska and enjoying the beautiful landscapes. It was family times that Dick spent with his wife, Ann, and with his son James and his wife Jessica, along with daughter Charlene, that he also cherished. Dick was especially grateful for his family and many times expressed his heart-felt appreciation for them. Dick was married to Ann for 54 years. They celebrated their 54th anniversary on 3/16/17: Dick said she looked the same as she did on the day they were first married. Dick’s greatest hope was that others would know God and find peace and comfort in the Lord. Dick found great happiness in connecting with his children, his grandchildren, and his siblings via phone conversations during the last part of his life. Dick told his family and friends that he did not fear death and that he was ready to leave this world and see his Savior. Dick is survived by: Wife Ann Jensen; Son Pastor Rich Jensen and his wife Tina Jensen; Granddaughters Tabitha, Priscilla and Bellagrace Jensen; Son James Jensen and his wife Jessica Jensen; Daughter Charlene Jensen. Dick is survived by his siblings: Joy Dobbs, John Jensen, Ellen Baker, Betty Stevenson, and Lorraine Jensen Taylor.

Richard &#8220;Dick&#8221; Jensen was born in Chicago, IL to Dorothy and Olav Jensen. He was the oldest of six children. He moved with his family to Seattle, Washington when he was 12 years old. His early memories included the long cross-country... View Obituary & Service Information

The family of Richard O. Jensen created this Life Tributes page to make it easy to share your memories.

Richard “Dick” Jensen was born in Chicago, IL to Dorothy and...

Send flowers to the Jensen family.