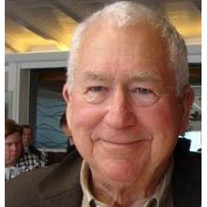 On March 3, 2021 we lost our Pucka, Robert Patrick Novak, when he passed away peacefully in his sleep. Bob was born on April 2, 1936 in Cleveland, Ohio to Dr. John Edward Novak and Rose Kelley Novak. When he was 2, the family relocated to Rancho Santa Fe, California where Bob grew up with the Rancho Santa Fe golf course as his backyard. His fondest memories were of his years spent on the beach, lifeguarding, surfing, and frustrating his parents as he and his buddies shaped their surf boards in the family garage. He eventually grew up enough to go on to graduate from Stanford followed by the University of the Pacific and spent the majority of is career as a pharmacist serving veterans at the V.A. Hospital in Palo Alto. Bob loved the beach, tending to his extensive garden, and tinkering on his cars. But what he did best and what he loved most was spending time with his 12 grandchildren. When reminiscing about time spent with their Pucka, the grandkids lovingly talk of their walks to 7-11, where Pucka would buy them Slurpee's and ice-cream. Playing in his Mazda Miata convertible in the garage was a favorite activity as well as catching rides on his back as they body surfed in the ocean. Pucka was always game to get down in the sand and build sandcastles, ride the rides at amusement parks and spend the afternoon playing in the pool. The quintessential “permissive” grandparent, Pucka exposed the kids to all sorts of activities that gave their parents grief (just adding to the enjoyment), such as eating popcorn with chocolate soy milk for breakfast, using the power tools in the garage (at any age!), jumping on all the beds in his house and climbing the trees in his backyard. No fort was too messy, no project too dangerous! He was immensely proud of all his grandchildren and was so excited about the arrival of his first great grandchild, Colton this past January. Bob is survived by his former wife, Patricia Ferrari Novak, son Steven Novak and his wife Marsha, daughter Lisa Quinn, daughter Jennifer Novak Tibbitts and her husband George and daughter Amy Yu and her husband Edward, grandchildren; Patrick, Liam, Jack and his wife, Kristen, Katherine, Claire, Brendan, Matthew, Nicholas, Kelley, Elisabeth, Joseph and Siobhan and great grandson, Colton. Always the happy, chatty guy, he was beloved by his caregivers and ensured they knew how much he appreciated them. His family is so grateful for all the care he received. The family will gather for a small, private memorial this summer. Memorial donations may be made to Surfrider Foundation.

On March 3, 2021 we lost our Pucka, Robert Patrick Novak, when he passed away peacefully in his sleep. Bob was born on April 2, 1936 in Cleveland, Ohio to Dr. John Edward Novak and Rose Kelley Novak. When he was 2, the family relocated to... View Obituary & Service Information

The family of Robert “Bob” Patrick Novak created this Life Tributes page to make it easy to share your memories.

Send flowers to the Novak family.