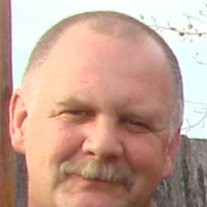 Robert Bowne, also known as Bill or Bob, was born in 1960 in Nyssa, OR to Maxine and William Bowne. He was the loving brother of Jeanine Jordan and Martina Bowne, both his juniors. He spent most of his life in Oregon, and passed away in Portland, OR at OHSU, due to complications from chemotherapy, after a tough battle with Aggressive NK-cell Leukemia. Bob went to school in Roseburg and Winston, OR. He attended Douglas High School and graduated in 1978. He went to Umpqua Community College and Oregon Institue of Technology, earning his degree in engineering in 1988. He was licensed as a professional Civil Engineer in Oregon and Washington, a Land Surveyor, and Water Right Examiner in Oregon Bob married his high school sweetheart, Donnie Hanna in October of 1979. They began dating at the young age of 14. They had 2 lovely daughters, Heather (30) and Trish (25). Bob was working for the Oregon Department of Transportation as the Lead Bridge Inspector for southern Oregon, at the time of his death. He started his career with ODOT in the summer of 1992 and enjoyed his work there. He had the opportunity to work in three different office locations during his time there, including, Salem, Eugene and Roseburg. Prior to his work at ODOT, he worked as an engineer at David Evans and Associates in Bellevue, WA. He also worked in Roseburg, for Fields and Ensley and Sunstuds Mill. Bob and Donnie had an amazing love story, and raised a great family. They became parents at a very young age and worked hard to raise two competent and confident daughters. Together they cultivated a strong pair of women, who went on to be strong mothers themselves. Bob and Donnie became grandparents on May 14th of 2006, when Trish gave birth to a beautiful little girl, named Alexzandrea. A year later in August they welcomed another addition to the family, when Heather gave birth to Brayden. A tribute to Bill's great nature is the wonderful relationships that he had with not only his daughters, but his son-in-laws as well. Bob enjoyed bowling with friends and was an avid hot-rod builder. He spent most of his freetime building, restoring, changing, and enjoying a 1957 Chevy. He spent many hours with his daughters restoring this car and it became a very special part of their relationship. Bob frequently went to auto shows and swap meets with his father, who is also restoring a classic Model-A. For their 25th wedding anniversary, Bob and Donnie got the opportunity to travel to Europe. They met their daughter Heather and her husband Brad over there, as Brad was stationed in Sicily with the Navy. This gave them the chance to travel to Paris, France, Dublin, Ireland, London, England and Rome, Italy as well as all over Sicily. Both Bob and Donnie greatly enjoyed this trip and both were glad to visit lands that thier ancestors came from. Bob was one in a long line of Bownes that came from England in the mid 1600s and was very proud of his heritage. For several years before his passing Bob had the fortune to spend a lot of time with his daughter Trish and his granddaughter Alexzandrea. He was such a wonderful "Papa" and Alex simply adored him. Trish and her father always had a special bond, she really was "daddy's little girl". When Donnie had to go back to work, when Trish was just three months old, Bob was able to stay home and spend time with her. This bond was strengthened over time and anyone who knows the two, could see the similarities they shared including an artistic flare. Robert Bowne, was a great man, a wonderful husband, a loving father and father-in-law, a fantastic grandfather and an incredible son. He will be missed, more than words can express. PDF Printable Version

Robert Bowne, also known as Bill or Bob, was born in 1960 in Nyssa, OR to Maxine and William Bowne. He was the loving brother of Jeanine Jordan and Martina Bowne, both his juniors. He spent most of his life in Oregon, and passed away in Portland,... View Obituary & Service Information

The family of Robert William Bowne created this Life Tributes page to make it easy to share your memories.

Send flowers to the Bowne family.