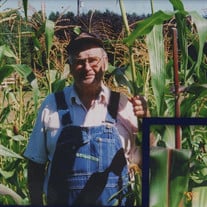 Robert Stewart Hardy, 88, of Carus, passed away on August 9, 2019 in Portland. Burial was at Beaver Creek Memorial Cemetery on August 16, 2019. Next to his Father and Mother. Arrangements were made by Hillside Chapel. Pallbearers were Robert Jr, Robert III, Robert IV, Christopher, Jim Hardy, Chris Hughes A celebration of life will be held Sept 7 between 2 pm and 6 pm at the home of Robert Hardy Jr. at 2682 Gable Rd St. Helens, OR 97051. (503)396-5637 Bob was born Coyle, Oklahoma to Frank and Mildred Hardy on August 21, 1930. He married Clarice Smith on 30 Jul 1955 at the Carus Community Church in Carus, Oregon. They had two children, Robert Jr., and Mark. He worked at Albers feed store in Oregon City working his way up to store manager. Bob and Clarice divorced in 1972. In 1977 he married Janice Thompson. They then bought the Douglas station in Gates, Oregon. After he retired, he took care of his mother full time and did so up until her death in 2001 at the age of 102. Bob always had a smile on his face a song in his heart and Bib-overalls on his back. Always quick to help whenever someone asked, I don’t think he knew the word no! Bob is preceded in death by his Father and Mother, his Sisters Leta and Clara, and his Brother James. Bob is survived by his wife of 42 years Jan, his daughter Jeannie, his sons Robert Jr, Mark, Randy, Steve, Mike, and Jerry, 11 grandchildren DeEllen, Robert III, Elizabeth, Sharie, Mark Jr, Jamie, Melissa, Nick, Dustin, Todd, Lisa, and Sara. 15 great-grandchildren: Christopher, Robert IV, Dillon, Alana, Jack, Austin, Nixon, Brianna, Nolan, Dominic, Isaac, Rodrigo, Jaiden, Caleb, and Bradley.

Robert Stewart Hardy, 88, of Carus, passed away on August 9, 2019 in Portland. Burial was at Beaver Creek Memorial Cemetery on August 16, 2019. Next to his Father and Mother. Arrangements were made by Hillside Chapel. Pallbearers were Robert... View Obituary & Service Information

The family of Robert Stewart Hardy created this Life Tributes page to make it easy to share your memories.

Send flowers to the Hardy family.