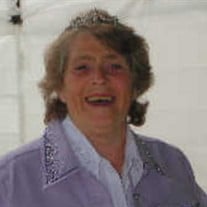 ROBIN GALE ANDERSON Robin G. Anderson, 83 of Milwaukie, died Thursday Jan. 29, 2009 She was born Sept. 8, 1925 in Tacoma, Washington, to Connor and Dorothy Harman. She grew up and attended school in Oregon City, Milwaukie, Salem and graduated High School in Willamina. It was at Milwaukie High School that she met John E. Anderson. She married John on Oct. 26, 1946. He died in 1996. Survivors include her Daughters Bobi Yardley of Aloha, Linda (L.J.)Thomas of Canby, Lori Sharp of Milwaukie, her Son James Anderson of Milwaukie; 4 Grandchildren: Christy, Shona, Kari and Rachel; and 4 Great Grandchildren: Taylor, Nicky, Lindsey and Rylan. She was a homemaker, worked at a law firm, and also enjoyed a 25 + year career of selling Tupperware. At one point she and her husband had their own business building homes. She loved to sew and at one time created custom swim suits. Later in her life Robin also worked at Hancock Fabrics and, until very recently, she worked at JoAnne Fabrics. Her many activities included playing the piano since she was a young child, ice skating and roller skating, the later she was still doing until just a couple of years ago. She also enjoyed dancing, snow skiing, boating and being with friends at their cabin at Lake Billy Chinook, and Bunco. She continued to be active late in life, including traveling with her friends and family and was still active on a bowling league. Most of all, Robin loved being around other people and life itself. In Robin’s life a good day was talking with family or friends. A great day was spending time with family or friends. If she was with one it was an occasion; more than one, it was a party. Robin’s memory will live on in the friends and family she leaves behind and she will be sorely missed by all who knew her. Her warmth, generosity, kindness, caring and friendliness to all she met are an example to us all. PDF Printable Version

The family of Robin Gale Anderson created this Life Tributes page to make it easy to share your memories.