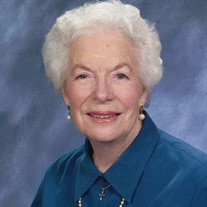 Memoirs of Rose Marie Noye-Kanzler Born on November 21, 1926 at their farm home near the town of Charter Oak, Iowa, to Henry and Teresa (Hanneman) Rosburg. She was the fifth child, after three brothers and one sister &#8211; the oldest brother,... View Obituary & Service Information

The family of Rose Marie Noye-Kanzler created this Life Tributes page to make it easy to share your memories.

Send flowers to the Noye-Kanzler family.