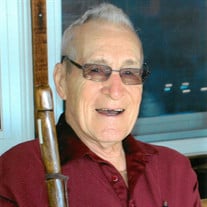 **The original dates for Roy's service has been changed due to weather. Please see below** Roy was one of 10 children born in northern Minnesota to Albert and Leona Paradis. He grew up there working on the family farm. In 1942, he moved with the family to Oregon, settling originally in Oak Grove and then Woodburn. A year after Pearl Harbor, when he turned 18, Roy enlisted in the US Army. After basic training in Texas, he was part of the war in Europe and helped the US win World War II. Upon returning home, he and his brother, Lawrence, traveled around and worked. He eventually settled in Pendleton and worked on a large wheat ranch. By then, he had met Fay Thompson, also of Woodburn, and the two were married in 1949. He began working at Crown Zellerbach paper mill in West Linn in 1951 and they moved there shortly thereafter. In 1964, he took a job at a new paper mill in Anderson, California. Within just a few months, though, he was being recruited to move back to Crown Zellerbach as a supervisor and the family came back to Oregon in 1964. He worked there until his retirement in 1983. In 1978, Roy and Fay moved to Oregon City where they lived until 2009. Roy spent the final eight years living at The Springs in Clackamas where he took part in nearly every activity offered. Roy's main joy in life was his family. He and Fay had five children. Fay passed away in 2009. Roy is survived by his children: Rick (and Carol) of Woodburn; Garry (and Diana) of Seattle; Ron (and Judy) of Bend; Susan Handy (and Paul) of Corbett; Sandy Courtain (and Stu) of Gladstone; 12 grandchildren and seven great grandchildren. He is also survived by his second wife, Lena Metteer whom he married in 2012; and two brothers, Donald (Chandler, Arizona) and Lloyd (Sublimity). A funeral mass will be held at 11 a.m. on Monday, Jan. 16 at Christ the King Catholic Church in Milwaukie. There will be a rosary at 10:30 and a reception following the mass, and then burial at St. John the Apostle cemetery in Oregon City at date and time to be determined soon. Roy was loved by all and will be missed.

**The original dates for Roy's service has been changed due to weather. Please see below** Roy was one of 10 children born in northern Minnesota to Albert and Leona Paradis. He grew up there working on the family farm. In 1942, he moved with... View Obituary & Service Information

The family of Roy Alfred Paradis created this Life Tributes page to make it easy to share your memories.

**The original dates for Roy&#39;s service has been changed due to...

Send flowers to the Paradis family.