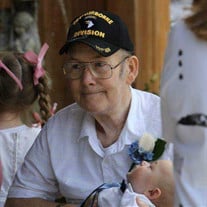 Rudy Ronald Rhodes, (the 2nd Son of Louis and Josephine Wanamaker Rhodes, born on July 19, 1943 in Coulee City, WA) took his last breaths surrounded by his wife and daughters on June 13, 2018, at the age of 74 in Oregon City, OR. He was proceeded in death by his parents, his Son John, and his grand-daughter Danielle Hagler. He proceeds his older brother L. Stanley (Janet) Rhodes, his beloved wife Kathleen, their 5 daughters, many grandchildren, and great-grandchildren. As well as much extended family who he loved and who loved him dearly. Rudy, as a disabled Army veteran, had struggled for many decades do to injuries sustained while in the service of God and country. He was asked shortly before his death, if he had known ahead of time the tremendous disabilities and pain that would result from his service in the military, would he do it again? He whole heartedly without any hesitation said “YES I WOULD!” He served as a paratrooper in the 101st Airborne Division, also known as The Screaming Eagles. All who knew Rudy, knew how much he loved this great land and that he had the heart of a patriot. In the midst of his Army Service, Rudy married his long-time teen sweetheart, Kathleen K. King (Kathy) at the ripe old age of 19, on April 13, 1963 in Portland OR. They recently celebrated 55 years of marriage together. They were blessed with 5 daughters and 1 son. Tammy (T.Jay) Moore, Jenny Rhodes, John Rhodes, Roberta “Robbie” (Mario) Montagna, Shelly (James) Hagler, and Shirley Jo (W.Eric) Dilg. They were also blessed with many grandchildren. Rudy once said “if I knew how much fun it was going to be to have grand-kids, I would have skipped being a parent and instead would have gone straight to being a grandpa.” In all seriousness though, he absolutely adored his daughters and loved being their dad. Rudy and Kathy currently have 26 grandchildren and 12 great-grand children with 2 more on the way. They also have many others who affectionately consider them family. From the time Rudy was a young boy he loved and participated in sports of all kinds. Both through his various schools and communities. He was an avid hunter and fisherman. He played basketball, baseball, football, he boxed, he bowled, and he was a golfer. He also loved coaching little league baseball. Rudy’s family moved around quite a bit when he was a child and he attended multiple Elementary schools in Washington State. His family moved to Condon, OR when he was in the 7th grade and he attended school there until they moved to the logging town of Kinzua, OR when he was a sophomore. Kinzua however, had no high school and all students were bused to the nearby town of Fossil. Rudy graduated from Wheeler County High School in Fossil OR in 1961. Rudy attended Clackamas Community College and was the Student Body President there in 1972. He worked for many years for the United States Postal Service in Oregon City and retired in 1997. Many in the community got to know him through interacting with him at the post office. He was highly regarded, loved and respected by so many beyond his family. Rudy always had a distant belief in God, but that belief changed to a deep rooted and abiding faith in 1977. He had been a good man before, but became an even better man after he accepted Jesus Christ and His gospel into his life. He was baptized into The Church of Jesus Christ of Latter-Day Saints and served the Lord faithfully for the rest of his days (40 years). He was not ashamed of the gospel of Jesus Christ and always sought to share the message of hope and peace found through the Savior and His path. Rudy’s last words were “I have done all that I can.” Like the Apostle Paul, Rudy also exemplified the scripture found in 2 Timothy 4:7 which reads... “I have fought a good fight, I have finished my course, I have kept the faith” YES HE DID! And he will be greatly missed!!! The family welcomes all who would like to attend Rudy’s memorial service. It is being held at the Church of Jesus Christ of Latter-Day Saints on Saturday, June 23rd at 11am. (Viewing from 10-10:30) 14340 S. Donovan Ln. Oregon City, OR 97045 He will be interred at the Mountain View Cemetery in Oregon City, OR shortly following the memorial service.

Rudy Ronald Rhodes, (the 2nd Son of Louis and Josephine Wanamaker Rhodes, born on July 19, 1943 in Coulee City, WA) took his last breaths surrounded by his wife and daughters on June 13, 2018, at the age of 74 in Oregon City, OR. He was proceeded... View Obituary & Service Information

The family of Rudy R. Rhodes created this Life Tributes page to make it easy to share your memories.

Send flowers to the Rhodes family.