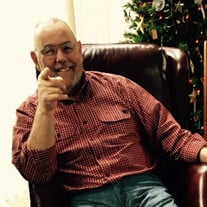 Russell Byron Olmsted died on May 15, 2018, in Canby, OR, at the age 75, after battling cancer and Lewy Body Dementia. Russell was born on February 21, 1943, in Oregon City, OR. He was the son of Leslie and Violet Olmsted and has an older sister, Donna, and a younger sister, Leslye. He graduated from West Linn High School in 1961, and married Judy Holzworth in 1963. They began their married life in an apartment above the Hillside Chapel in Oregon City, where they lived for 3 years, before buying their first house in West Linn. They raised 3 girls in West Linn, Robin, Cyndi, and Beth. In 2000, they moved back to Oregon City where they raised their son, Taylor. When asked if he attended college, he would always reply that he had attended “Valley Copperstate”, which was a trucking company he had worked for in the 1960ʼs. He later drove truck for Risberg Truck Lines and Willig Freight Line and was a member of Teamster Local 81. After “retiring,” he drove school bus, first for Lake Oswego and then for Oregon City School District. Russell was a man of great integrity and strong faith. He was a founding member of Calvary Baptist Church in West Linn, and later attended Oregon City Christian Church. His hobbies included dune buggies, fishing, hunting and tacos. His friendliness and sense of humor endeared him to people of all ages. He is survived by his bride of 55 years, Judy Holzworth Olmsted of Milwaukie, 3 daughters and their spouses; Robin and Daniel Rife of Bend, Cyndi and Tim Ganfield of Salem, and Beth and Derek Conn of Salem and 1 son, Taylor Olmsted of Milwaukie; 8 grandchildren, Katya, Hannah, Aaron, Peyton, Ethan, Caitlin, Jocelyn, and Aidan; and sisters Donna and Bruce Peterson of Victoria, Canada, and Leslye and Larry Smith of Wilsonville. He was dearly loved by his family and friends, as well as the staff of Countryside Living and Bristol Hospice, who provided him such wonderful care in his final months. How blessed we feel to have loved and been loved by such a great man. He taught us to love generously, work hard, pray often, value family, laugh and be silly, change a tire and the oil, throw a ball, bait a hook, and drive like we own the road. He will be celebrated later in a private family service. Coming full circle, arrangements are being handled by Hillside Chapel Funeral Home.

Russell Byron Olmsted died on May 15, 2018, in Canby, OR, at the age 75, after battling cancer and Lewy Body Dementia. Russell was born on February 21, 1943, in Oregon City, OR. He was the son of Leslie and Violet Olmsted and has an older... View Obituary & Service Information

The family of Russell B. Olmsted created this Life Tributes page to make it easy to share your memories.

Send flowers to the Olmsted family.