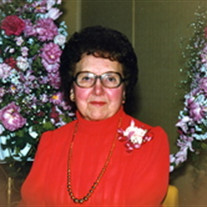 Ruth was born in Lostine, OR to Floyd Burns and Hattie Alice Leonard and was the youngest of three children. The oldest was Ruby Elizabeth and a brother James Wesley. As a child she knew she wanted to be a teacher and she wouldn’t let anything stand in her way of attaining that goal. She excelled in school and as a senior at Lostine High School she was elected student body president, and as valedictorian she gave the commencement address at her graduation ceremony. After graduation from high school she attended Eastern Oregon Normal School in La Grande and in 1932 she became the first in her family to graduate from college. She began her career as a teacher in a one-room schoolhouse in Tygh Valley, OR. Soon after that she took a job teaching in Maupin and it was there that she met her husband-to-be, Leo. After a short courtship they were married in Wishram, WA on June 24, 1940. They started married life together in The Dalles and lived there for four years before she gave birth to their first son Richard. When he was about a year old they moved to Portland and purchased their first home. It was there that Terry and Kerry were born. Ten years later Leo was promoted and the family moved from Portland to Medford, but the job proved too stressful for him and he passed away in June of 1960, after suffering his third heart attack. She was now 48 and on her own with three teenaged boys to raise. Homeless and without a job Ruth and the family moved to Salem and she went back to college for two years to renew her teaching certificate. After graduating from Monmouth University: School of Education she was offered a job teaching fifth grade at Forest Hills Elementary School in Lake Oswego. She and the twins moved to West Linn where she taught for fifteen years until her retirement in 1977. After retiring she moved from West Linn into a mobil home park in Oregon City. She wasn't one to just sit around home so she became active in her church and the Ladies Auxiliary of the Elks. She relished in her roll as Grandmother and Great-Grandmother and enjoyed visiting with family and friends and would travel with her good friends, Afton and Elizabeth. In October of 2003 she suffered a head injury that changed her life forever. She could no longer live on her own and moved into Tanner Spring Assisted Living. That was her home for almost eight years and it was there that she passed away quietly with family at her side. PDF Printable Version

Ruth was born in Lostine, OR to Floyd Burns and Hattie Alice Leonard and was the youngest of three children. The oldest was Ruby Elizabeth and a brother James Wesley. As a child she knew she wanted to be a teacher and she wouldn&#8217;t let... View Obituary & Service Information

The family of Ruth created this Life Tributes page to make it easy to share your memories.

Ruth was born in Lostine, OR to Floyd Burns and Hattie Alice...

Send flowers to the family.