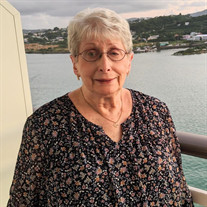 On Monday, December 27th, 2021, Ruth DeMoss Corda passed away at the age of 79 at home in Milwaukie, OR. Ruth was born on January 10th, 1942, in Fresno, CA to Robert Glenn & Ivy Demoss. She grew up in North Fork, CA until she graduated from Sierra High School in 1960 and embarked on a career in the travel industry. Ruth later returned to North Fork, CA where she met and married Alfred T Corda on June 5th, 1976. Their daughter, Courtney, was born July 28th, 1978. Alfred’s career in the Forest Service moved the family to Libby, MT in 1981. Ruth’s passion for travel showed throughout her many careers. After high school, she spent time as a flight attendant with Hacienda Airlines, shuttling between LA and Vegas and as a Hertz car rental agent in Long Beach, CA. Later, she was a travel agent in Libby, MT for many years. She was able to enjoy many opportunities to travel in her life with her family. She went on several cruises, to many different places, including the Caribbean and the Panama Canal. One of her most favorite trips was to Australia in the early 2000s. She loved spending her time volunteering over the years. First, at her daughter’s schools, and later at Hospital Auxiliary at Cabinet Peaks Medical Center, Kootenai Pets for Life & PEO Chapter BJ, an organization that champions the advancement of women. She had many hobbies including: reading, cooking, and the bowling league where she met many lifelong friends. She was an amazing cook with so many memorable times spent in her kitchen and around the dining table with family and friends. She is survived by her daughter, Courtney Corda, of Portland, OR, sister Gwen Stevens of Sparta, TN, sister-in-law Claudia Smith of Greenfield, CA, and nieces Dana, Cara & Lisa. She was preceded in death by her husband, Alfred T Corda, her brother-in-law Jerry Smith and her parents, Robert Glenn & Ivy Demoss. A Celebration of Life will be held at a later date. In lieu of flowers, the family requests donations go to PEO Chapter BJ c/o Leslie Crooks 310 W Oak Libby, MT 59923 or Kootenai Pets for Life.

On Monday, December 27th, 2021, Ruth DeMoss Corda passed away at the age of 79 at home in Milwaukie, OR. Ruth was born on January 10th, 1942, in Fresno, CA to Robert Glenn & Ivy Demoss. She grew up in North Fork, CA until she graduated from... View Obituary & Service Information

The family of Ruth Evelyn Corda created this Life Tributes page to make it easy to share your memories.

Send flowers to the Corda family.