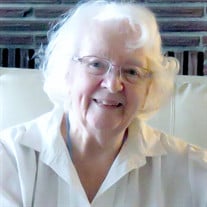 Ruth Magdalena Williams, 92, of Portland, Oregon, died March 19, 2019, at her home. Ruth was born July 27, 1926, in Portland, Oregon. She was the youngest of six children of George and Magdalena (Mix) Morasch. She graduated from Commerce High School and married her first sweetheart, Chuck Williams, in 1944. She worked for the Oregon Game Commission as a secretary in the first years of her marriage. Ruth later ran an Amway home products business for many years, and encouraged other women in the business by forming a Women’s Executive Council in Portland. She received Christ as her savior in the early 1960's and became a member of Gateway Baptist Church in Portland. She was a deaconess there and served on various commissions as well as starting and working many years in a Sunday School class for children/young adults with special education needs. In the 1980's she joined the Oregon chapter of the American Historical Society of Germans from Russia and served as their representative to the national board. She also helped establish a vibrant research library for the Oregon chapter. She cared about people and always had a heart to help those in need and encourage them to turn to Jesus as their savior. Survivors include her husband; sons, Rodger (Karen) and Richard (Debbie); daughters, Terri Williams and Cherri (Scott) Warnke; 8 grandchildren; and two great-grandsons. They were all the joy of her life and recipients of her love and care. She is preceded in death by brothers Ed, Bill, Robert and Merlin; sister Aleda Pollack; son Charles and grandson Jeffrey Williams. Memorial service will be held Saturday, April 13, at 2 pm, at Gateway Church, 13300 NE San Rafael St., Portland, Oregon. Live-streaming will be available at the time of the service via a link from https://www.gatewaychurchpdx.com/. In lieu of flowers, expressions of sympathy may be made in Ruth’s memory to The Arc Oregon or a charity of your choice.

Ruth Magdalena Williams, 92, of Portland, Oregon, died March 19, 2019, at her home. Ruth was born July 27, 1926, in Portland, Oregon. She was the youngest of six children of George and Magdalena (Mix) Morasch. She graduated from Commerce High... View Obituary & Service Information

The family of Ruth Magdalena Williams created this Life Tributes page to make it easy to share your memories.

Send flowers to the Williams family.