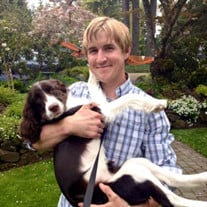 Ryan Free Logsdon Birthplace: Richland, Washington July 7, 1985 – August 2nd, 2021 Home: Gladstone, Oregon Ryan packed a lot in during his 35 years on this earth. He grew up in Lake Grove, Oregon, and graduated from Lakeridge Highschool in 2004. Ryan was a fierce competitor and had many hobbies. He participated in baseball, golf, camping, whitewater rafting, skiing, and fishing. Ryan was an outstanding baseball player and made the Lake Oswego 12-Year-old Little League All-Star team. He later played 3rd baseman and cleanup hitter, winning the 14-year-old State Championship alongside his best friends and teammates. It was at Lakeridge Highschool that Ryan hit his first regulation home run in a game against St. Helens. In his Junior year, he received a Varsity letter. Ryan was nicknamed “the beast” by his team. Once, in warmups for a game at Lakeridge, he took a ball to the face, knocking out his front tooth. He would not allow the coach to bench him and insisted on playing on. Thankfully, one of the mothers came out onto the field, stopped everything, located the tooth, and hauled him off to the Dentist. Another time, in a Varsity game against Lake Oswego High, Ryan hit a home run that went over the left-field fence and out into the street. This game happened to be against a friend and previous teammate. So naturally, Ryan was smiling and pointing as he jogged the bases. Although talented at baseball, Ryan’s ultimate passion in life was fishing. Anyone who knew him said that he was the best fisherman they had ever seen. There were countless times that Ryan would step between two fishermen who had been at it all day. They would have to watch while Ryan pulled his limit of Steelhead or Salmon right out from under them. His favorite places to fish were the Deschutes River, Clackamas River, Eagle Creek, and Diamond Lake, with family. Ryan’s love of the outdoors steered him to start his own, very successful, landscape business in the Lake Oswego area—Logsdon Landscape. He was the hardest worker and looked forward to getting to work each morning. Ryan loved pleasing people and never said “no” to his customers. This meant that he happily took on a diverse list of services. These customers were also friends and would mention how lucky they were to have Ryan as a part of their family and community. Aside from Ryan’s athleticism and work ethic, his most memorable characteristics were his charming, loving, and bright personality. He was a caring son, sibling, and friend. He had no shame in his goofiness, charmed many with his bright smile, and was one of the most loving and forgiving individuals you would ever come across. Ryan was a fearless daredevil that never backed down from a challenge. He was our handsome 90's boy that caught every lady’s attention, and he knew it. Ryan loved all dogs or “Scoobs,” but had an indisputable love for his girl, Izzy (photographed). He was a protector to his sister, Megan, a best friend to his brother, Zach, and a goofy companion as well as a role model to his baby brother, Brett. He had an undeniable bond and love for his mother, Teresa. Her enduring love for her son was—and still remains—incredible. He thrived when doing all his favorite things with his father, Dave. Ryan was constantly making him proud. Through his many challenges, Ryan never lost sight of the importance of his family. Ryan is survived by his mother, Teresa Brill, father, Dave Logsdon, sister, Megan Logsdon, brothers, Zach Brill and Brett Logsdon, and stepmother, Brenda Giddings. Ryan has 10 cousins who all love him, as do his brothers and sister. We will miss Ryan’s sweet smile and funny sense of humor. Memorial Service: 11:00 am on August 28, 2021, at River West Church in Lake Oswego Celebration of Life to Follow: Around 12:30 pm at Foothills Park Pavilion in Lake Oswego.

The family of Ryan Free Logsdon created this Life Tributes page to make it easy to share your memories.