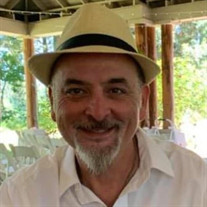 Scott was born in Bloomington, Indiana on October 13, 1967. He and his older brother came to the Great Northwest with their parents in 1972 to be closer to the Roeder family, (transplants from Wisconsin in the late 40s). Then, with the birth of his younger brother, they became a family of five. They lived in Vancouver, Washington where he met his grandparents, many aunts, uncles and cousins, played with boundless energy, made a lot of friends.... and graduated from preschool. When his dad took a job at Clackamas Community College they came to Oregon City. He attended Eastham, Gaffney Lane, and Mount Pleasant schools, Oregon City High School and Clackamas Community College and was an active member of Christ Church Apostolic through his growing up years. He played with boundless energy, on his Big Wheel, Green Machine, bicycle, roller skates, skateboard, stilts, in trees, on the baseball field. He played the trumpet in the school bands , the church band and as a soloist and accompanist. He played the guitar and he sang songs many of which he wrote. He played Joseph in the Christmas Nativity play at church, the Pirate King in The Pirates of Penzance, and the Drum Major at OCHS. He made a lot of friends ….and graduated from school to adult life. He was married and had a daughter and a son, his pride and joy, as he played very successfully, his new role as dad and provider. He worked as a painter at Gemtop and then Freightliner. He made a lot of friends …..and graduated into the last act of his life. He married his soulmate, Tammy, in 2013. Both had medical issues that forced them into early retirement and moved to their happy little condo in Lincoln City. He played his guitar again, wrote and sang more songs, enjoyed nightly sunsets, bonfires on the beach, catching and frying fish, spending time with family, and finding and painting rocks. He became a famous local artist with his rock paintings and music. And, yes, he made a lot of friends …..and graduated into the presence of God. Scott Douglas Roeder passed away peacefully Saturday, April 4th at the age of 52 years and 5 months. Predeceased by his father Paul L Roeder he is survived by his loving wife, Tammy Ford Roeder, his children Tiffany Nicole Leatherwood and Blake Douglas Roeder, his grandsons, Joshua Paul Leatherwood and Oliver Watson Leatherwood, his step-children/grandchildren, Christine Church with William and Evelyn Church, BC Hall Ford, Keighla Williams and David Willians Jr., his mother, Bonnie Carol Roeder, his brothers, Bradley Thomas Roeder and Bryan Ray Roeder, his half-brothers, Craig C Roeder and Fred Wade Roeder and many in-laws, aunts, uncles, nieces, nephews, cousins and yes, a lot of friends remembering him with great fondness. Due to the COVID-19 restrictions, there will be no funeral service but a memorial service will be planned for a later date. Scott was laid to rest on Friday, April 10th at Mountain View Cemetery 500 Hilda Street, M-23-16-A Oregon City, OR 97045 Cemetery Gates: Open Daily Mon-Sun Dawn to Dusk

Scott was born in Bloomington, Indiana on October 13, 1967. He and his older brother came to the Great Northwest with their parents in 1972 to be closer to the Roeder family, (transplants from Wisconsin in the late 40s). Then, with the birth... View Obituary & Service Information

The family of Scott Douglas Roeder created this Life Tributes page to make it easy to share your memories.

Send flowers to the Roeder family.