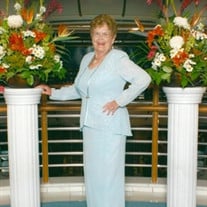 Shirley “Elaine” Fry May 5, 1929 – October 16, 2009 Elaine Fry, 80, of Beavercreek, Oregon went to be with the Lord on October 16, 2009. She was born on May 5, 1929 to Gladwin and Vesta Hamre in Silverton, Oregon, where she was raised and attended school. During her teen years she picked hops, strawberries, beans, and worked at Cooley’s Iris Garden. She attended church regularly with her parents and brother and was in the church choir. Elaine had a beautiful singing voice, which she said she thought was a gift from God and was a wonderful pianist. She sang at many events, such as her graduation, also many weddings and funerals, among other things. She met her husband, Bob Fry, in 1946 at his father’s wedding where she had been asked to play the piano. They soon started dating and married in August 1947. They lived in Silverton and then moved to Salem, Oregon where they purchased their first home. Elaine and Bob raised five children. They moved to many places over the years, but always wanted to return to Oregon to be near family. In 1978 they bought a house and acreage in Beavercreek, Oregon where they lived happily for 25 years until Bob’s passing in September 2003. Elaine continued to live in their house in Beavercreek and thoroughly enjoyed keeping up her yard and garden. Elaine was active with her children in her early years with Camp Fire Girls, Girl Scouts, Boy Scouts and Jobs Daughters. Later, after the children were gone, she and her husband bought a GMC motor home and joined the GMC Cascaders, traveling all over the country. She also thoroughly enjoyed playing games and camping with her family. She volunteered at the Senior Center serving and delivering meals, as well as at Willamette Falls Hospital in the surgical waiting area. Elaine also actively participated in a weekly swim group, activities with her ceramics and Garden Club friends, numerous church ventures, and her school alumni lunches and reunions. She is lovingly remembered by her daughters, Sandi Fallon of California, Debbie Ball of Washington, and Lori Hattig of Oregon and their spouses; sons, Terry Fry of Washington and Dennis Fry of Oregon and their spouses; and her 12 grandchildren and 9 great-grandchildren. She will be greatly missed by all. A memorial service to celebrate her life will be held at 12:30 pm on Saturday, November 7, 2009 at the First Presbyterian Church located at 1321 Linn Avenue, Oregon City, OR. In lieu of flowers, donations in Elaine’s name may be directed to Silverton Cemetery Association, First Presbyterian Church, Oregon City Community Center (meals program) or the Willamette Falls Hospital Foundation. PDF Printable Version

The family of Shirley Elaine Fry created this Life Tributes page to make it easy to share your memories.

Send flowers to the Elaine family.