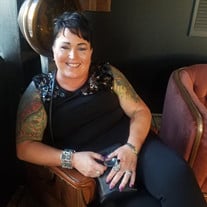 Stephanie Lynn Chambers died in a car accident on Willamette Falls Drive in West Linn, Oregon around 8:30pm on April 21, 2021. Stephanie was born on a beautiful summer afternoon at Wilcox Memorial in Portland, Oregon on June 25, 1968, to Bradley and Janet Weaver. Steph attended Milwaukie High School in the early 80’s. In 1984 when she was 16 years old, she enrolled in Milwaukie Beauty School in Milwaukie, with the idea of completing her high school education at the same time. She graduated from Beauty school the summer of 1985. Her first job was for Mervyn’s beauty salon. After a couple of years, she moved to Makeover in downtown Oregon City, where she met her future business partners and long-time friends. Stephanie together with the same friends opened Mirage in the Willamette area of West Linn in 2000. Steph was a Hair Stylist and part Owner of the New Mirage at the time of her death. For several years, Stephanie volunteered her services to Abbey’s Closet, helping and styling hair for the special needs kids. Stephanie married George Passon March of 1990. They had two children, Evan Passon and Cassondra Passon. George died in March of 2000. She married Peter Boyd in 2005, they later divorced. Still looking for the everlasting love, and never finding it, Steph married Tim Chambers in 2015, they divorced April 2021. Stephanie survived breast cancer, a double mastectomy and 11 surgeries related to the breast cancer. She just hit the 5-year mark last November. Steph’s favorite grandmother Dorothy and her step-Dad Don McCormick predeceased her. In addition to her children, Stephanie is survived by her, mother and step-father Janet & Chuck Bestul, father and step-mother Brad & Teddie Weaver, brother Chad and his wife Julia Weaver, Step-brother Bryon, step-sisters kathy, Linda and Stacie. Along with many aunts, uncles, cousins, nieces and nephews.

Stephanie Lynn Chambers died in a car accident on Willamette Falls Drive in West Linn, Oregon around 8:30pm on April 21, 2021. Stephanie was born on a beautiful summer afternoon at Wilcox Memorial in Portland, Oregon on June 25, 1968, to Bradley... View Obituary & Service Information

The family of Stephanie Lynn Passon created this Life Tributes page to make it easy to share your memories.

Stephanie Lynn Chambers died in a car accident on Willamette...

Send flowers to the Passon family.