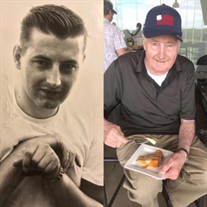 Steven J. Pongracz-Bartha, age 81 died on Monday April 6, 2020 in Oregon City, OR. Steven was born on June 5, 1938 in Hajmasker, Hungary to George & Helen Pongracz-Bartha. Steven was the second of their four children. Surviving Brothers include Edward of Simi Valley, CA, Peter of Portland, OR & George of Tigard, OR. In December of 1944, Steven and his family escaped Hungary from the advancing Russian forces, ending up in Southern Germany after a series of displaced persons camps due to issues with WWII. As displaced persons the family was granted permission to immigrate to the United States in 1951 aboard the USS Naval Ship General R.M. Blatchford from Germany to New York and his family eventually settled in Portland, OR. In 1957 Steven became a US Citizen. Steven attended Central Catholic High School and moved on to the University of Portland and graduated in 1960 with a degree in Engineering. After graduation he went to work for the US Forest Service as a road design engineer. Steven served in the United States Army from Sept 11, 1961 until September 10, 1963. He was stationed in Fort Belvoir, VA where his met and married his future wife, Beverly A. Tobin. At the completion of his military service Steven and Beverly moved back to Portland where he got a job at Bonneville Power Administration. Most of the work he did at BPA consisted of software development and maintenance in relation to power scheduling. He retired from BPA in 2000 but continued to work there for another 13 years as a contract employee working on maintaining old power scheduling software while a new system was being implemented. Outside of work Steven enjoyed golfing with friends and working on mechanical projects, including fixing cars and home projects-he could fix anything. Steven & Beverly were married for over 56 years and were devout members of the Catholic Church, rarely missing a service. Steven is survived by his wife, Beverly Pongracz-Bartha, his children, Steven Pongracz, Michael Pongracz and Jennifer Smith. He is also surviced by three grandchildren, Owen Smith, Macy Smith & Jackson Pongracz. A memorial service is planned for a future date.

Steven J. Pongracz-Bartha, age 81 died on Monday April 6, 2020 in Oregon City, OR. Steven was born on June 5, 1938 in Hajmasker, Hungary to George & Helen Pongracz-Bartha. Steven was the second of their four children. Surviving Brothers include... View Obituary & Service Information

The family of Steven J. Pongracz-Bartha created this Life Tributes page to make it easy to share your memories.

Send flowers to the Pongracz-Bartha family.