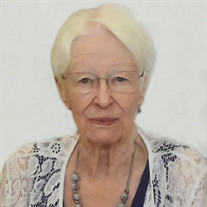 Sue Andrikopoulos, dear mother, grandmother, great-grandmother and friend, returned to her Lord on Friday, December 31, 2021. Sue died peacefully surrounded by family following a stroke. She was 90 years old. Sue was born in Buffalo, Wyoming, on January 26, 1931, to Bruce and Helen Parsons. Raised on a cattle ranch in northwest Nebraska, she developed a love of animals, a love which she passed on to her children. Sue was educated in Nebraska and Wyoming with her early years spent in a one-room school house and later at a boarding school on the campus of University of Wyoming. She graduated from Sioux County High School in Harrison, Nebraska. Sue went on to study at the University of Wyoming where she met the love of her life, Basil Andrikopoulos. They married in Laramie, Wyoming, in 1950. After college, they lived for a short time in Colorado then moved to Montana, their lifetime home. There they raised their three children: Vicki, Diane, and George. Sue loved her family and kept them at the center of her life. Together with Basil, Sue helped support St. Vincent’s Hospital through the Saints organization and her volunteerism, including managing the gift shop there for a number of years. She dedicated many years to Episcopal churches in both Butte and Billings. Sue served on the altar guild as well as being a member of the Daughters of the King in Billings. Her home was always open and welcoming to family, friends, and especially to her grandchildren. She enjoyed P.E.O., playing bridge and bunko with good friends, as well as traveling with Basil in the U.S. and abroad. Sue was predeceased by her parents Bruce and Helen Parsons, her brother Charles, and her beloved Basil who died in 1993. She is survived by her daughters Vicki Bruner, Diane Andrikopoulos, and her son, George Andrikopoulos (Michelle); grandchildren, Brian Bruner, Cara Bruner (Santiago Perez), Amanda Andrikopoulos, Robin Bostwick, Natalie O’Neill (Mike) and Angela Andrikopoulos Hedegaard (Aaron); and great-grandchildren, Nora and Eloise O’Neill, and Jacqueline Hedegaard. Sue’s family will deeply miss her but celebrates her new life in heaven. A private family service will be held at a later date.

The family of Sue Andrikopoulos created this Life Tributes page to make it easy to share your memories.

Send flowers to the Andrikopoulos family.