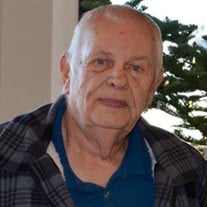 Terry Lamont Tomlin March 11, 1941 - April 13, 2019 Longtime Oregon City resident Terry Lamont Tomlin passed away April 13, 2019. He was 78. Terry was born in Oregon City, OR in 1941 to Clayton and Jemima Tomlin. He grew up in Oregon City and Newberg, the latter for just a few years but remained a town he always loved. Terry graduated from Oregon City High School in 1959. He met his wife Pat when they were kids and began dating after high school. They married on September 3rd, 1965 at Zion Lutheran Church in Oregon City and welcomed daughters Julie in 1972 and Jennifer in 1977. Terry was a Ford Parts man for 24 years, working at Francis Ford and Marv Tonkin dealerships in Portland. Terry was born with cerebral palsy but never let this stop him from living life to the fullest. He inspired many people. Terry loved spending time in his shop, driving his "Big Red" and Caribbean Blue antique Ford trucks, traveling around town during the summer in his Plymouth convertible and Ford Ranchero, going to the OC Burgerville Thursday night cruise-ins, attending antique car shows and swap meets, animals, the Clackamas County Fair, New England Patriots, PBS Mysteries, The Price Is Right, Oldies rock and roll, breakfast with his car buddies and his daily trip to the Oregon City Fred Meyer to sit on the bench and talk with friends. Most of all, he loved his sweetheart, his daughters, and seven grandchildren. He was preceded in death by his dear brother Robin in 2004. Terry is survived by his devoted wife of 53 years, Pat, daughters Julie Nielsen of Spokane, WA and Jen (Mike) Ludwig of Camas, WA, his Aunt Mary and grandchildren Kayla (Denis), Christian, Rebekah, Lance, Camden, Hudson, and Nicole. He is also survived by a loving extended family and many, many friends who loved him. A celebration of Terry's life will be held Saturday, April 20th at 11 a.m. at Christ Church Apostolic, 600 Barclay Hills Drive, Oregon City, OR 97045. Public viewing will be from 10-10:45 am at the same location before the service. Arrangements through Hillside Chapel. Whenever one of Terry's grandchildren would snuggle up on his lap for hugs, he would always say "Thanks for stopping by!!" Well Dad, thanks for stopping by. You are so loved.

The family of Terry Lamont Tomlin created this Life Tributes page to make it easy to share your memories.

Send flowers to the Tomlin family.