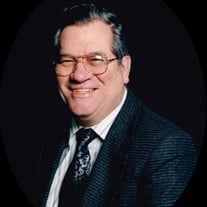 A wise man once said, “We are here not to get all we can out of life, but to try to make the lives of others happier.” (Theodore A. Lutz, Class of 1954 - Tillamook High School Yearbook) Theodore “Ted” Arthur Lutz was born on Friday, August 21, 1936, to Rev. Edward and Verona (Borchers) Lutz of Sherwood, Oregon. As a boy, Ted lived in Sherwood, Oregon and San Jose, California, and later relocated to Tillamook, Oregon, where he spent most of his teenage years. Ted was a 1954 graduate of Tillamook High School and was involved in Wrestling, the Radio Club, the Chess Club, and the Dancing Club. Ted attended Redeemer Lutheran Church in Tillamook, where his dad was the pastor. It was here where he later met his bride-to-be, Sandra Rose Johansson, and they began dating on December 25, 1956. On May 29, 1954, Ted enlisted in the U.S. Army. He was a Military Police Officer in the “B” Company 6th Engineer Combat Battalion. He served during the end of the Korean War as an E-4 Army Specialist 4 and was awarded a National Defense Service Medal and a Korean Service Medal. Ted was released from active service on May 28, 1957. On August 30, 1958, Ted gathered up the courage to propose to the blonde Swedish girl, Sandra Johansson, in front of Redeemer Lutheran Church in Tillamook, Oregon. Ted and Sandra were joined together in marriage on Sunday, December 7, 1958. Thus began a “Love Affair to Remember.” Ted was a well-experienced and skilled man who worked in a variety of jobs. Early on, he worked as a cement mixer and hod carrier, appliance repairman, piano salesman at Rife’s Music Center, lumber mill worker in Tillamook, paper mill worker in Albany, salesman for Fuller Brush and Shaklee, manager at King Road Variety Store, manager at Willamette Crest Apartments, and in office management at a truck driving school and a recycling center. Most of his occupation was spent in various management roles working for the Oregon-based Bi-Mart retail chain, where he worked in Corvallis, Albany, Klamath Falls, McMinnville, and Oregon City. Ted finally retired from his position at Bi-Mart at the age of 65 in 2001. In June of 2012, Ted was diagnosed with Mantle Cell Lymphoma. The cancer went into remission only for him to be stricken with Progressive Supranuclear Palsy. Ted struggled with his health for almost eight years. At the age of 83, Ted went home to his Heavenly Father, having passed away peacefully in his home with family at his side on Friday, June 5, 2020. Ted was preceded in death by his son Arnold Lutz; parents Rev. Edward and Verona Lutz; brothers William and Rev. Paul Lutz; and sister Lois Schuerman. Ted is survived by his beloved wife Sandra Lutz (Johansson) of almost 62 years; daughters Julieann (Steve) Webb of Happy Valley, Oregon, and Tanya Elias of Marana, Arizona; daughter-in-law Deborah Lutz of Brookings, Oregon; son Troy (Michelle) Lutz of Gladstone, Oregon; grandchildren Christopher, Sara, and Clarina Webb, Corrina and Sean Lutz, Joshua Elias, and Devyn Lutz; great-grandchild Hadlee Webb; and many beloved nieces and nephews. A private memorial service for Theodore will be held this Thursday. Ted will be laid to rest at St. Paul Lutheran Cemetery in Sherwood, Oregon. In lieu of flowers, donations may be given to the Christ the Vine Lutheran Church Organ Fund. Please click the link below to watch Ted's memorial video: https://www.youtube.com/watch?v=ZwB0yhqNZH8

The family of Theodore Arthur Lutz created this Life Tributes page to make it easy to share your memories.

Send flowers to the Lutz family.