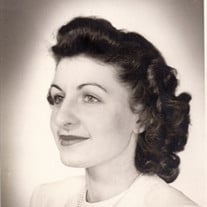 View the image gallery Theresa Marie DeFrancesco was the first born to Philip and Pauline (Rizzo) in Detroit, Michigan, on September 9th, 1920. She was soon joined by brothers Joe and Ray, and sister Rose. Although seven years older than Rose, they shared the same bed keeping each other warm and forming a bond that has lasted over the years. Twenty years later Joann was born to whom Theresa acted as a mother, which Joann is grateful for still. Because only Italian was spoken at home, Theresa knew no English when she first went to school and said nothing. The teachers thought she must have been deaf and taught her sign language! School was a struggle for Theresa having dyslexia and missing many school days to take her mother to Hudson's in downtown Detroit. However she flourished in trade school, perfecting her sewing skills that would be her career throughout her life. She worked as a fitter at Saks Fifth Avenue fitting brides and the wealthy. Theresa's extended family with 12 aunts and uncles and many cousins gave her a rich life. Theresa spoke fondly of picnics at Belle Isle and being a bridesmaid in so many weddings. Going to the Twenty Up Club with her siblings after WW II would then change her life. That's where she met John Ripplinger, a Navy lieutenant, who was able to sweep her away from the protective barrier of her family to a marriage that lasted 51 years until John's death in 1999. Theresa's first four babies, Chris, Mike, Annette, and Greg, where born in Lansing where John worked for the state of Michigan. Being a new mom with her brother Joe's wife Betty and having Ray as a renter kept her family close. Her last baby, Joseph, was born near Southfield, five babies in nine years! Theresa was active at St. Michael's Catholic Church and school where all of her children attended. She formed warm friendships with neighbors and families from St. Mikes that have lasted until now. Moving to Oregon with most of her family in 1974 was a new chapter in Theresa's life. She once again was hired as a fitter at the nicest dress store in Oregon City, Lance Apparel. For the next 25 years she again befriended neighbors, customers, and members of St. John's Catholic Church. Also she was now closer to her two sisters and her parents who had previously made the big move across the country to Oregon. After her mother died, Theresa and John bought into an RV resort outside of Phoenix, AZ, to begin one of the most fun chapters of their lives together. Lying in the sun pool-side and enjoying potlucks and dances with fellow RV neighbors at Gold Canyon RV Resort filled their lives with so much enjoyment. Maybe you were a visitor during a cold winter! We all know how much Theresa missed her beloved John after he passed away in 1999. Even with a life extending quadruple by-pass, she still endured back and hip surgery. However Theresa enjoyed life at Courtyard Fountain in Gresham, with meals served to her table, weekly maid service, and all kinds of weekly and seasonal field trips and classes. We still treasure the little items she made at arts and crafts classes. After short stays at an assisted living facility, Theresa found peaceful and personal care at two adult foster homes with Maria in Gresham and Oana in SW Portland. Her son, Joseph, enlivened her life with massage, acupuncture, and wheelchair exercising two to three times each week. Thanks to the two Eucharistic ministers from Gresham and SW Portland who bought her Communion and company each week. Theresa enjoyed her last months watching cooking shows on TV and winning cookies at daily bingo. To commemorate Theresa's devotion to St. Teresa, the Little Flower's simple way, white roses were the theme at her high Mass at St, John's in Oregon City. Her four sons and two of her grandsons, Ben and Alex, were Theresa's pall bearers. Both of her sisters Rose of Mesa, AZ and Joann from Silverton, OR, and her brother Ray of Troy, MI attended the service. Grandchildren Ben and Zoe both gave readings from the Bible. During Communion Jack Springer, the son of her niece and godchild, Ann, wonderfully played "Let It Be", on the piano, and the soloist movingly sang "Ave Maria". Participants received white roses after the service and reception following as a remembrance and a thank you. This September on 09/09/09, enjoy a highball for Theresa who is finally dancing with John in heaven. PDF Printable Version

View the image gallery Theresa Marie DeFrancesco was the first born to Philip and Pauline (Rizzo) in Detroit, Michigan, on September 9th, 1920. She was soon joined... View Obituary & Service Information

The family of Theresa Marie Ripplinger created this Life Tributes page to make it easy to share your memories.

Send flowers to the Ripplinger family.