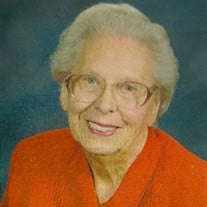 Viola Verna Holzworth Keller March 12, 1919 -- September 29, 2010 Viola V. Keller was born to Fred and Lydia Holzworth in Jamestown, North Dakota, March 12, 1919, the middle of seven children. Shortly thereafter, the family moved to Eureka, South Dakota. She was preceded in death by her three older brothers Otto, Calvin, and Milbert, her three younger sisters Lillie Wright, Florence Layton, and Hilda Layton, husband Samuel Keller and infant son, Donald, twin brother of Ronald. She is survived by daughter Janice Long (Roger), son Ron Keller (Jane) and grandchildren Curtis Keller (Debbie) and DeAnn Vermillion (Joel). She especially enjoyed her six great grandchildren – Jonathan and Julia Keller and Josiah, Grace, Daniel, and Mattea Vermillion. The Holzworth family moved to Oregon City in 1930 where she graduated from Oregon City High School in 1938. The Oregon City Evangelical Church was a most prominent influence in her life; she began attending there in her youth through their bus ministry and was a faithful member all her life. At church, she met Sam Keller whom she married in 1941. Active church involvement was very important for their family. She began working for Fred Meyer in 1939, and after a break while the children were younger, returned as head of the payroll department until her retirement. Following the death of Sam in 1979, Vi and Lillie shared a home for nearly twenty years and enjoyed traveling and senior activities. In 1999 Vi moved to Homewoods Retirement Community where she enjoyed eleven active years. PDF Printable Version

The family of Viola V. Keller created this Life Tributes page to make it easy to share your memories.

Send flowers to the Keller family.