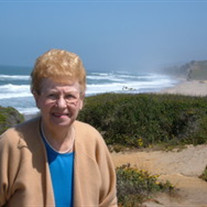 Jeannie was born in Oregon City, where she lived her entire life. Most of those years she lived on her parents' Helen (born in Poland) and Roy's (born in Lithuania)40 acre farm in Redland. She grew up there, as a farmer's daughter, along with her two older brothers, Roy and Ted. She used to "walk 4 miles to and from school in the rain and the snow." (When you click on the VIDEO, double click on the picture once it starts for a full screen show.) Later in life, she moved back to the 40 acre farm with her own family, into a home that started as a one-room shack and grew over the years, to a 3 bedroom home, with most of the work being done by her father and her first husband Wilbur's father. Virginia graduated from Oregon City High School and started a family at the age of 20, with Ron, then Steve 5 years later, and Bill 4 years after that. She always wanted a daughter, and was rewarded with her daughter-in-laws and her "foster" daughter, who lost her own mother when she was 14. Jeannie supplemented her homemaker career with several others, like a baker and a butcher. She was generous with her energy and in stretching her limited resources. She was always helping her family and friends with things like painting and wallpapering. She was always the mother. As her family was growing, there was much family time, as her three boys had two families of cousins in Oregon City and Redland, many of which were close in age. The children had four grandparents who were like parents. She helped all her sons and loved them deeply. When she married Al in 1962, she gained two more children. Jeannie and Al were married for 45 years, when Al passed away in 2008. Jeannie used to say how Al "sure loved me...he treated me like a queen." Jeannie was always busy with family, friends, homemaking, several jobs and helping others. Women's clubs and card playing were activities she enjoyed, as well as square dancing, ceramics,cooking (known for her mashed potato dumplings) music, bowling, fishing, camping and traveling. In later years, she loved watching Wheel of Fortune and Jeopardy, as well as the Mariners baseball games. Most all of these activities were shared with her family and friends. Jeannie and Al eventually moved to Highland Avenue in Oregon City after Jeannie's parents passed away. They loved to travel after he retired in 1982, and they went on several cruises and travels to many countries, many times with a group of their friends. Jeannie loved having fun. Jeannie moved to an apartment at Lausche Gardens Retirement Center in Oregon City in the summer of 2008. Jeannie also loved babies...a visit from a baby would light up her life...Jeannie is survived by two of her sons and their families, 8 grandchildren, 12 great-grandchildren, and many nieces and nephews. She was a wonderful woman who was loved by many and will be missed. She is resting peacefully at the Mt.View Cemetery in Oregon City. PDF Printable Version

Jeannie was born in Oregon City, where she lived her entire life. Most of those years she lived on her parents' Helen (born in Poland) and Roy's (born in Lithuania)40 acre farm in Redland. She grew up there, as a farmer's daughter, along with... View Obituary & Service Information

The family of Virginia H. Anderson created this Life Tributes page to make it easy to share your memories.

Jeannie was born in Oregon City, where she lived her entire life....