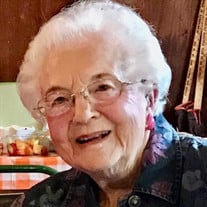 Virginia (Gin) VanHoy was born November 25, 1921, in Hay, Washington. She was the third of what would be five children to Claude and Elsie VanHoy. The VanHoy’s were an extremely close and loving family throughout their entire lives. Older sister and brother, Gladys and Ken looked after Virginia, and younger sisters Ollie Mae (OM) and ‘the baby of the family’, Idabelle. The family moved to Oregon City via Springwater, OR when Gin was a young child. She lived in Oregon City ever since. Virginia met Albert (Al) Buggins during High School. Al, an only child, was particularly drawn to the close-nit VanHoy family. Al and Virginia were married July 20, 1943, while Al was in the Navy during WWII. After the war they lived in the brick apartment building on High Street - which is still there - and after the rent was raised by $2.50/month they decided it was time to build their home on a lot they owned on Division Street. Al was a carpenter with craftsman friends. Together Virginia, Al and friends built what became their forever home moving in November 1950. Virginia and Al were married 58 exemplary years. After Al’s death in 2001, Virginia continued to live there another 16 years until she decided she would move to Berry Park where her sister Ollie May was living. OM and Gin were very close their entire lives; dressing as twins as youngsters and both marrying Canby boys who went into the Navy together. OM, Gin and Idabelle traveled by train to visit Al and Herman in California during their Navy training. Gin spent 4 months with Al in Bremerton during the war while Al’s ship, the Maryland, was being repaired after a kamikaze attack in the South Pacific following the 3 week voyage in reverse. Virginia attended bookkeeping school following graduation from Oregon City HS. She worked as a bookkeeper for Ed Jarman in Oregon City, a man she very much respected, as a bookkeeper and tax preparer for a CPA office and with her dear friend Pearl at Starkers flower shop in Gladstone. She also picked blackcaps every summer in OM and Herman’s fields in Beavercreek even taking son, Mark, to the fields when he was just six months old. Al and Virginia enjoyed camping and fishing together; spending vacations every summer at lakes in central Oregon and fall salmon fishing on rivers on the Oregon Coast. After retirement they enjoyed traveling to Sitka, Alaska where Mark and his family live. There they experienced bigger water and bigger fish including a close encounter with humpback whales which Virginia did not appreciate. They once drove the Alcan ultimately bringing a small pickup from Haines by ferry to leave in Sitka. They also went to Branson, MO several times where they enjoyed country music shows. Virginia, with her sisters, Ollie Mae and Idabelle faithfully attended the First (Evangelical) Presbyterian Church of Oregon City for over 80 years, volunteering in many ways. She especially enjoyed working in the Hope food pantry along side Ollie May every Tuesday for about 15 years. Virginia lived a great life full of family and positivity. She was an outstanding supportive loving wife, mother, sister, aunt, grandmother and great grandmother. Virginia was the last surviving member of her generation of VanHoy’s being preceded in death by her brother Ken; sisters Gladys, Ollie May and Idabelle; her grandson Cory Mickelson and of course her loving husband Al. She is survived by her son, Mark and daughter-in-law Sheri Buggins; grandchildren Tera Allard and Erik Buggins; great grandchildren Natalie and Jack Mickelson; Samantha and Vaughn Allard; nieces Karen Brisbin and Sherry Main; and nephew Jeff VanHoy; and loving caregiver Brianna, her children and helpful friends. In lieu of flowers donations may be made to the Hope Food pantry at the First Evangelical Presbyterian Church at 1321 Linn Ave. Oregon City, OR 97045.

Virginia (Gin) VanHoy was born November 25, 1921, in Hay, Washington. She was the third of what would be five children to Claude and Elsie VanHoy. The VanHoy&#8217;s were an extremely close and loving family throughout their entire lives.... View Obituary & Service Information

The family of Virginia Marie Buggins created this Life Tributes page to make it easy to share your memories.

Send flowers to the Buggins family.