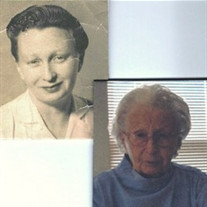 Virginia Robinson, age 96, passed away in her sleep on December 24, 2009 at her daughter Julie’s home in Oregon City, OR where she lived for the last 8 years. She was born Virginia Beryl Dotson in Prosser, Washington to William and Julia Dotson on July 18, 1913. Her parents moved from Virginia to Washington in the early 1890’s to 1900. She was the youngest of 10 children and the last to die. She grew up in farming country where she enjoyed riding her horse ‘Babe’ and helping her parents. While attending college at 16, she was an outstanding basketball and softball player with a nick name of “Jinx” because she would jinx the other team into losing. Her passion for sports continued throughout her adult life. As her children grew she enjoyed being a participant in family baseball games. She was an avid fan of the San Francisco Giants. Virginia moved to California in her 20’s living much of her life in Napa. She had seven children: Talia Lee Hudson and Gary Dale Hudson both preceded her in death, David Robinson of Napa, Julia Arnold Chamberlin of Oregon City, OR, Linda Arnold of Salem, OR, Geraldine Arnold Drew of Napa, Joe Arnold of Santa Rosa. She had fourteen grandchildren, eight great grandchildren, three GG grandchildren and many nieces and nephews. She took care of her children like a dedicated protective mother tiger. Once grown, her advice was given only when asked. She gave her children the respect to make there own way in life never meddling but always helpful. She was the perfect friend in that you could confide in her and be assured that she would never pass it on. Virginia retired as a Psychiatric Technician in 1975. After retirement she enjoyed several travel trips by bus, train, ship and plane. She was always delighted by family gatherings as she was a fabulous cook. Even with seven children her house, vegetable garden and yard were always immaculate. In 1983, she moved to Oregon to be closer to her two daughters. She enjoyed her new adventure creating a new home and discovering a new city. Mom you will be remembered with fond memories of independence and strong will. May we all mirror your mannerisms. PDF Printable Version

Virginia Robinson, age 96, passed away in her sleep on December 24, 2009 at her daughter Julie&#8217;s home in Oregon City, OR where she lived for the last 8 years. She was born Virginia Beryl Dotson in Prosser, Washington to William and Julia... View Obituary & Service Information

The family of Virginia Beryl Robinson created this Life Tributes page to make it easy to share your memories.

Virginia Robinson, age 96, passed away in her sleep on December...

Send flowers to the Robinson family.