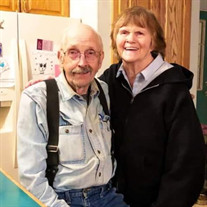 Bill Schrader was born September 20, 1939 in North Plains Oregon to John and Dora Schrader. He passed away on April 11, 2022. He is survived by his wife of 62 years, Margaret and daughters Melinda (Scott) Roley, Melissa (Paul) Liechty, Molly Lynch and Margy Schrader Lynch as well as grandchildren Briget, Brittany, Brandee, Dan, Liz, Aaron, Ben, Kayleen, Jory, Chael, Sam and Annabella and also 19 great grandchildren. He was preceded in death by his parents, brother John, sister Peggy Parkhurst, granddaughter Jenny and his in-laws Bob (who he called dad) and Eva White. He was raised in Clarkes Oregon where he attended Clarkes School and graduated from Molalla High School. He married the love of his life, Margaret in 1960 and together they raised their four daughters at their home in Beavercreek. He was a skilled mechanic and iron worker who could fix anything. It was not unlike him to help anyone who needed something repaired. His kids and grandkids remember how he would always check the car they were driving before they would leave Bill’s home to make sure they were safe. He made a great life for his family tying work with play. He took them on trips every summer traveling to Utah, Idaho, Arizona and Colorado. He helped his uncle harvest wheat several summers in Colorado and also mined gold in Alaska for many summers. He enjoyed the sheer beauty , peace and quiet of Alaska. He loved motorcycles and riding with his brother, daughters and grandkids. Bill and Margaret took their family on many fun camping trips. He worked on equipment and cars up to the end of his life. He taught all of us so much and he will never be forgotten. Please join us for the Weenie Roast Memorial on Saturday, April 16th from 1-4 at Clarkes Grange. We will provide hotdogs, brats, buns, marshmallows, chocolate bars and graham crackers. Please bring something to go along with it. A private burial will be held on Monday, April 18th.

Bill Schrader was born September 20, 1939 in North Plains Oregon to John and Dora Schrader. He passed away on April 11, 2022. He is survived by his wife of 62 years, Margaret and daughters Melinda (Scott) Roley, Melissa (Paul) Liechty, Molly... View Obituary & Service Information

The family of William "Bill" Eugene Schrader created this Life Tributes page to make it easy to share your memories.

Send flowers to the Schrader family.