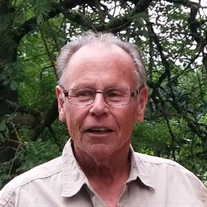 Bill Given died unexpectedly in his home in Oregon City on March 25, 2018. He is survived by his wife of 53 years, Pat, daughter Tamera Yocom and husband Jess, son Todd Given and wife Danay, four grandchildren - Angela Iden, Phylicia Given, Trystan Given and Ashlyn Porter, four great-grandchildren - Marleyjo Iden, Marshall Iden, Jovin Mendez and Amira Mendez, sisters-in-law Kathleen Blevins and Mary Blevins, many nieces and nephews and a lot of extended family. Bill was born in Portland Oregon and was adopted, at birth, by William and Caroline Given. He grew up in the home on Campbell Avenue that his parents bought before they were married in 1938 and he lived there until he married. He attended Chief Joseph Grade School and graduated from Benson High School in 1963. Growing up, his parents were avid square dancers and Bill proudly watched them dance on a local television program, Circle 8 Hoedown. During those years he was able meet many famous country-western singers including Johnny Cash, Lefty Frizzell and many other entertainers, some even coming to their home. He was proud to show off the cowboy hat that Lefty formed and shaped for him. Bill and Pat met in April, 1963 at Cape Lookout State park where both families were camping. They were married September 21, 1964. Tamera was born in 1965, Todd in 1968. The family moved to Gladstone, OR in 1969. Some of the best times were spent camping, skiing and going to the sand dunes. During the summer, after work, Bill and Pat would often take Tami and Todd and usually a few neighbor kids, and go rafting down the Clackamas River or go ride dirt bikes with friends and family. He also would take the family and go on mud rally’s and sand dune trips in the family Bronco, named the “Hobby Horse”. After that came many happy years of riding ATV’s in the sand dunes. Bill was an only child growing up and when he married Pat it was a package deal that included a large, loving family - the Blevins clan. He loved spending time with the family, especially at his Oregon City and Lincoln Beach homes. Bill started his painting business W.E. Given Contracting, Inc. in 1971 - originally a one-man operation painting homes to where it evolved to the business it is today with over 35 employees working on large commercial projects that still operates with Pat at the helm. He was always very proud that he was able to help so many people over the years - to watch them grow and provide a living for their families. Bill was passionate in life - always a car enthusiast starting with a brand new 1963 Ford Galaxy 406 cu in, 400 hp - which, by the way, landed him in jail overnight after getting a speeding ticket for going 120 mph! Needless to say, ownership of that car didn't last long after that! The month after Bill and Pat were married, they purchased a 1956 Chevrolet Nomad and soon afterwards the motor was in parts in their living room - waiting to be re-built. This was the first of many "projects". Bill's thinking was - if it had a motor and wheels, it had to be modified and that continued throughout his life. He loved cars, motorcycles and the Larsen boat that he and Pat bought in 1989. In 2006, Bill and Pat decided to go "full-circle" and purchased a 1955 Chevrolet Nomad that was a ground up restoration project. Completed in 2008, it has won numerous awards including the Portland Roadster Show and the Forest Grove Concours d'Elgance and it sits proudly in his shop today along with other cars including the beautiful 1964 Thunderbird that was bought by his parents brand new off the showroom floor where he worked at Damerow Ford. He was unable to finish his last project, an all steel, hand built 1934 Ford Roadster, but his vision is known and will be fulfilled by his family, many car builders and friends. The plan is to fulfill his wishes and show the finished car in the 2019 Portland Roadster Show. Many have said his last name is a bit prophetic - Bill will always be remembered and loved as an outgoing, affectionate and generous "giving" man. He had a big heart and a bigger-than-life personality. A remembrance and celebration of a "life well lived" will be held at 2pm on Sunday, April 22nd at the Tumwater Ballroom located at 211 Tumwater Drive, Oregon City, OR 97045

Bill Given died unexpectedly in his home in Oregon City on March 25, 2018. He is survived by his wife of 53 years, Pat, daughter Tamera Yocom and husband Jess, son Todd Given and wife Danay, four grandchildren - Angela Iden, Phylicia Given,... View Obituary & Service Information

The family of WIlliam E. 'Bill' Given created this Life Tributes page to make it easy to share your memories.

Bill Given died unexpectedly in his home in Oregon City on March...

Send flowers to the Given family.