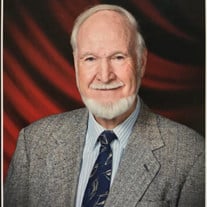 William Marshall Goodwin passed away January 25, 2020 at the age of 80 in Oregon City, Oregon. He was the last surviving member of his siblings. “Marshall” was born November 30, 1939 in Rock Hill, South Carolina to John Edward Goodwin and Sarah Elizabeth (Sharp) Goodwin. His father was a Methodist minister and the family moved numerous times within South Carolina during his early years. He completed his bachelors and masters degrees in education at Eastern New Mexico University and married Joyce Elizabeth Eady on June 1, 1962. They moved to Oregon City, Oregon where they planted themselves for the rest of their lives. Marshall taught school at Mt. Pleasant elementary for 36 years, teaching both 6th and 4th grades—most of these years in the same classroom. He loved Oregon: the beautiful outdoors, the state fair, Oktoberfest, tulips, the coast, the OSU Beavers, the mild climate. He would sit in his gazebo in the morning drinking coffee and watching birds for hours—even when too chilly for most. His creative side led him to painting, woodcarving, a variety of music genres, and working in his yard. Following in his father-in-law’s footsteps, Marshall was a member of the Lions Club civic organization for many years, serving in several officer positions and active in donation transports as well as food delivery and other projects. His cornea courier duties influenced him to become an organ donor. He was an active member of Methodist churches in the Oregon City area. The friendships that Marshall developed throughout his Oregon years were deep and loyal. From his teacher friends who continued to gather long into retirement, to the “Couples Club” church group that sustained for over 50 years, to comrades in the Lions Club with the purpose of service to others, he was a friend to many. Above all he loved the time he was able to spend with his family: children, grand- and great-grandchildren, brother and sisters, nieces and nephews…and even in-laws. William Marshall Goodwin is survived by his wife of 57 years, Joyce Goodwin, his son Benjamin Goodwin (Sharon), his daughter Sara Goodwin (Dave Johnson), grandchildren Kasey Burnett (Caleb), Rebekah Dye (Luke), Jonathan, Elizabeth, David, and Anna Goodwin, and great-granddaughter Erin Burnett. He is preceded in death by his parents, John and Sarah Goodwin, and siblings Jane Goodwin (infant), John Goodwin, Sara Goodwin and Francis Goodwin Zalewski Miller. In lieu of flowers please consider a donation to the Oregon Lions Sight and Hearing Foundation (https://olshf.org/).

William Marshall Goodwin passed away January 25, 2020 at the age of 80 in Oregon City, Oregon. He was the last surviving member of his siblings. &#8220;Marshall&#8221; was born November 30, 1939 in Rock Hill, South Carolina to John Edward... View Obituary & Service Information

The family of Marshall Goodwin created this Life Tributes page to make it easy to share your memories.

Send flowers to the Goodwin family.