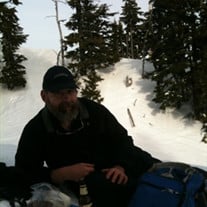 Wyman 'David' Elliott was born November 25th, 1945 in St. Louis, Missouri. His parents divorced when he was very young and he spent his childhood moving from state to state, going to a different school every year. The one constant was his summers on his grandparents' farm in Arkansas where he remembered good times with his cousin Mike, who was like a brother to him, and the kindness of his "Grannie". He was proud of the work ethic he learned on that farm, and it proved handy later in life. David was a football player in high school, and loved to go watch his son Wesley play when he was in High School, often giving him tips and pointers for his game and reliving his days as a player. After high school, David joined the Marine Corps. He served for 2 years, and was stationed in Camp Legeune, NC and Okinawa, Japan. After the Marine Corp, he did a meat cutter apprenticeship, and worked his way up to Journeyman, and meat cutting became his life's career. David eventually ended up in San Diego, California where he met and married Carol Sue Benyas, who already had a daughter Laura Eve, in 1980. Carol and David had a son Wesley David in 1981. David was an avid tennis player, and had to be called out of a tennis match when Carol went into labor with Wes so he could meet her at the hospital. In 1986, the family moved to La Center, Washington. Wesley started kindergarten in La Center and Laura started Junior High. During their school years, David worked to support his family at various grocery stores in the Portland Metro area working as a meat cutter. He enjoyed playing tennis and chess and going to his kids' sporting events. When the kids were out of school, David filled his days tending to his farm animals, playing tennis, and working. He retired early from meat cutting, but worked at the La Center School District as a bus driver in recent years. David touched a lot of lives over the years. He will be remembered as a funny, generous, and cantankerous man with strong beliefs and a unique way of viewing the world. He is survived by his Son, Wesley, his Daughter, Laura, his Sister Karen, Niece Lisa, and Cousin Mike. Services will be Saturday December 3rd at 1pm at the La Center Grange Hall. He will be buried on his family plot in Jonesboro, Arkansas. In Lieu of flowers, please consider making a donation to Children's International: https://www.children.org/giftform.asp?sid=7C29C58-3287-4D03-88C6-36D5BDC3B3451 PDF Printable Version

Wyman 'David' Elliott was born November 25th, 1945 in St. Louis, Missouri. His parents divorced when he was very young and he spent his childhood moving from state to state, going to a different school every year. The one constant was his... View Obituary & Service Information

The family of Wyman David Elliott created this Life Tributes page to make it easy to share your memories.

Send flowers to the Elliott family.